Facebook Whistleblower blast on Meta’s Rebranding. Whistleblower Frances Haugen said, there is not any change until the CEO not change.

Facebook Whistleblower, Frances Haugen made her first public appearance in a Web Summit Tech conference held in Lisbon. Haugen said that Facebook, rebranded as Meta now will be stronger if Mark Zuckerberg steps down as chief executive of his social media business.

In that conference, Haugen also stated that if Zuckerberg will step down from his position, the company will focus on its user safety policies. Until it is unlikely to change if its founder remains in their position. 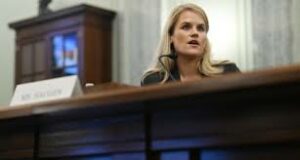 Earlier, it is very well known that she is a former Facebook employee, who leaked many documents and internal paper which details how the company struggle and hangs between user safety. She also criticized the rebranding of the company from Facebook to Meta which was done by last week. She stated that in the documents which were released to US Congress, it was clearly mentioned that the company needs to spend more on the user safety systems, not on these Virtual reality things.

“It should be noted that Mark holds a 54% voting share on Facebook. He is also the chairman and the CEO. And any independent shareholder who wants to change the top position can’t do that. However, Mark controls the decision-making in the company because of the majority of ownership in the firm. And that makes his position unchangeable. Therefore, she thinks it is unlikely the company will change until he changes his position,” said Haugen.

Over those leaking of internal papers and documents, Facebook denied all the facts and said this is used to just paint a false picture over the community.

Responding to Haugen’s comments, a Meta spokesperson said: “The argument that we deliberately push content that makes people angry for profit is deeply illogical. We are on track to spend more than $5bn on safety and security in 2021 – more than any other tech company – and have 40,000 people to do one job: keep people safe on our apps.”

The spokesperson added that Meta was able to invest in expansion and safety at the same time. “Obviously, we can and must do both of these things at the same time – and we are.”