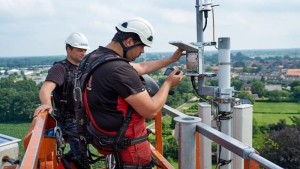 KPN technicians install a LoRa gateway onto a mobile transmission tower in the Netherlands, as part of the rollout of a new IoT-dedicated network. Courtesy-gizmag.com

A long range (LoRa) network for the so-called Internet of Things (IoT) is now available across the Netherlands, making it the first country in the world to implement the IoT system nationwide.

The Netherlands, which is about the same size as Connecticut and Massachusetts combined, is now completely covered by telecom KPN’s LoRa wireless access.

The Internet of Things is widely seen as the next technological revolution, in which Wi-Fi-connected devices are able to communicate directly, coordinate their activity and increase efficiency and productivity while saving time and energy.

After initial implementation in Rotterdam and The Hague in November 2015, the KPN LoRa network is fully active throughout the country as of June 30.

There are currently about 1.5 million objects hooked up to KPN’s network, but now that the full system is ready that number is due to rise quickly, due to the nature of IoT.