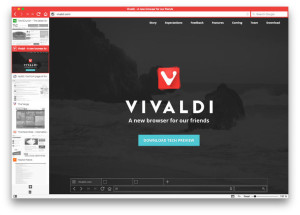 It’s been roughly a year since the first technical preview of the Vivaldi browser landed, and now version 1.0 has been released.

Vivaldi, which was founded by Opera co-founder and former CEO Jon von Tetzchner, prides itself as a browser for power users — a group of users, von Tetzchner and his team believe, that has been mostly abandoned by other browser vendors.

Vivaldi runs on Windows, Mac, and Linux and has variety of ways to allow users to tweak their browsing experience. You can move the tab bar along any edge of the screen, assign mouse gestures and keyboard shortcuts to almost any action imaginable, as well as adjust the appearance of the start page and “speed dial.”

Vivaldi also offers a few advanced ways of working with tabs. In order to de-clutter the tab bar, a user can “stack” several of them together, as well as tile the stack over the screen to have a better view. Unfortunately, there’s no way to make tabs show in a tree, which is arguably the most convenient way of working when you have more than 20 tabs open.

Whether this kind of thing will appeal to less technical users is a moot point: Vivaldi isn’t aiming for world domination. Its slogan is “A browser for our friends,” and Tetzchner seems confident he can find enough of those. And he has, after all, done it before.