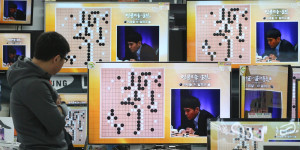 The Battle between AI and Humans continues as Google’s AlphaGo will take on current number one Go player Ke Jie.

The self-learning program, developed by Google-owned AI lab, DeepMind, successfully defeated Go grandmaster Lee Sedol over a five-match tournament in March, but Ars Technica writes that Lee was only ranked number four in the world at the time.

Back in March, after AlphaGo beat Lee for the first time, Ke reportedly said: “I don’t want to compete with AlphaGo because judging from its matches with Lee, AlphaGo is weaker than me. I don’t want AlphaGo to copy my style.”

After watching AlphaGo continue to take on Lee, Ke changed his mind. He reportedly said: “AlphaGo was perfect and made no mistake. If the conditions are the same, it is highly likely that I can lose.”

Jie’s remarks certainly make for an interesting claim, which will make seeing how it fares against AlphaGo — which has now learned from its match against Sedol — all the more interesting.

A Google DeepMind spokesperson told Ars Technica: “We’re still exploring options for AlphaGo’s next steps, but don’t have anything to share at this time.”