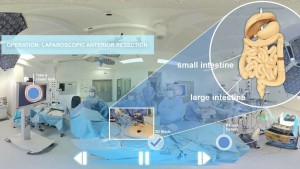 The world’s first operation to be streamed in virtual reality will take place this week, presenting a new way to educate medical students across the globe. Royal London Hospital will become the first hospital in the world to host a virtual reality (VR) operation conducted by a top cancer surgeon, which will be streamed live to thousands of medical students so that they can learn about surgery first hand.

The procedure is set to be filmed through two 360-degree cameras with multiple lenses, enabling users to move around the theatre and zoom in and out of the operation.

The operation carried out by Barts Health staff has been made possible in partnership with healthcare company Medical Realities and live streaming app Mativision.

Dr Shafi Ahmed, a cancer surgeon at Barts Health NHS Trust, is one of the foremost cancer surgeons in the UK and also the co-founder of a healthcare company called Medical Realities that is trying to improve how medical students are trained by using augmented reality (AR) and VR.

Dr Ahmed said, “I am honoured that this patient has given permission for his experience to provide this unparalleled learning opportunity.

“As a champion of new technology in medicine, I believe that virtual and augmented reality can revolutionise surgical education and training, particularly for developing countries that don’t have the resources and facilities of NHS hospitals.”

It will be streamed through the Mativision app, allowing thousands of medical students to tune in – and anyone else who wants to, with the aim of reaching people in developing countries.

The stream will begin on Thursday April 14 at 1PM BST. You can download both the iOS and Android apps in preparation, or for Gear VR, just search ‘VRinOR’ in the Oculus Store.