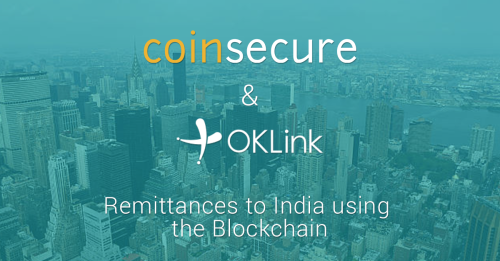 OKLink is a blockchain money transfer network that gives every remittance and payment company the same cost advantage, global reach, and speed of Western Union.

Launched in August 2016, OKLink is growing rapidly and currently offers payouts in five countries, at over 100,000+ locations.

The panel, “Pioneering Remittance Opportunities & Challenges of Innovators” covered the landscape of remittance related opportunities over the blockchain. Both teams at Coinsecure and the OKCoin newly created network, OKLink, acknowledge the potential the blockchain has to transform global remittance as we know it.

“We at Coinsecure not only recognize Bitcoin as the most important application of blockchain but also its potential role in alleviating global transaction woes and expedite remittance. Coinsecure is thrilled to partner with OKLink to provide faster and cheaper services to the Indian population,” said Benson Samuel.

Benson Samuel and Mohit Kalra, founded Coinsecure with the mission, “Connecting India to Bitcoin.” Coinsecure works to educate and enable individuals and businesses to leverage Bitcoin and Blockchain technology through the first and only INR based blockchain explorer, an open order book exchange with a rest API, mock trading platform/testnet, paper wallet services, an online wallet service and merchant payment gateway.