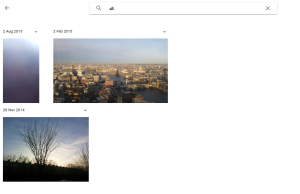 01 April 2016 :
No No, It’s not about this date, but for a fact, Google Photos now lets you search using emoji. Try it yourself. The company announced the news in a blog post on Google+ last night, explaining (in emoji also) that sometimes “searching with a full word just doesn’t cut it,” and you need to use little tiny pictures instead.
The search uses the same image recognition skills Google Photos has had for a while now, but for some reason, searching with emoji does feels a little more impressive. We’re not sure how many emoji the update supports, but Verge staff tested it out with some basics: the beach emoji bought up pictures from the beach; the sunglasses smiley got us snaps of folks in sunglasses (and VR headsets); while the burger emoji gets pictures of all the burgers we were so impressed with we took pictures of them.

More worrying, though, is this trend for introducing April Fools’ jokes that are actually real products. Is Google going to keep emoji search in Google Photos? It also introduced a new “MicDrop” feature in Gmail this morning, but then quickly killed it after a bug “inadvertently caused more headaches than laughs.” Will search by emoji survive? Who knows.