The Bullet Start To The 3D Printed 9mm Semi-Automated Pistol 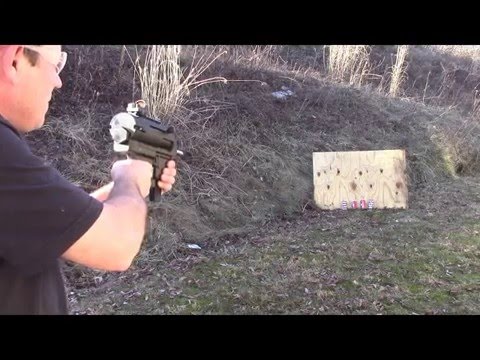 5 February, 2016, Virginia, USA: Weapons and their technology are evolving day by day. Earlier, when a person used to think about manufacturing weapons few images that flash beyond his eyes were heavy machinery, state-of-the-art technology and high-tech tools. In those days, if someone would have said that one day the entire weapon could be made by just a printer, people would have just walked pass by him, calling him a lunatic. But the tables are now turned around and what was considered as impossible has been made possible.

Breaking all the myths, a guy who goes by the name ‘Derwood’ has released a new video in which he is testing his new kitty ‘Shuty-MP1, a small semi-automatic 9mm weapon that is almost entirely 3D-printed with inexpensive PLA plastic. However, the manufacturer claims that the weapon has only two parts which are made up of metals and those are its barrel and springs.

Talking about his new invention, Derwood said, “This gun has been a work in process for about a year now. The first model required some welding and machining, and the goal was to keep it simple so that anyone could build it. It is now to that point.”

However, Derwood is not totally satisfied with his new firing bolt as he says the gun has one major drawback. Explaining on the same line, he adds, “Shuty-MP1 isn’t perfect; the plastic around the barrel apparently begins to melt after 18 shots if it’s not allowed to cool. This backlash can prove to be a big hurdle for the weapon.”