This week, a new, fast-spreading Covid-19 variation known as omicron sent Bitcoin, cryptocurrency, and traditional markets into a tailspin, prompting investors to “stay on guard.” 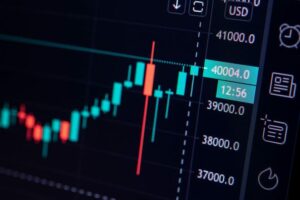 The omicron token first surfaced in November, and it looks to be the consequence of the newly identified coronavirus strain. The Omicron cryptocurrency, abbreviated OMIC, is presently trading at $576.48, according to CoinGecko (approximately Rs. 43,311).

The  Omicron token was selling for $65 (about Rs. 4,883) on Saturday, November 27, before exploding to an all-time high of $689 (roughly Rs. 51,765) on Monday, November 29. Despite the fact that the overall crypto market hit a bottom at the end of last week, the Omicron coin saw a massive surge.

This week, the Bitcoin price dropped more than 5percent in a matter of hours, dropping from all-time highs of about $69,000 per Bitcoin to 20percent and plummeting Bitcoin into a technical bear market that has destroyed billions of dollars from the total cryptocurrency market value.

However, the price of one little cryptocurrency, which happens to be called omicron, has soared by about 500 percent in the days since the World Health Organization announced the new Covid-19 variant—reminding us of the recent surge and fall of a fraudulent Squid Game-inspired cryptocurrency.

Last month, an unaffiliated crypto project inspired by the popular Squid Game TV show but unaffiliated with it or Netflix NFLX -0.4 percent saw its squid coin rise thousands of percent before falling to nearly nothing.

This year, a slew of meme-based cryptocurrencies, lead by dogecoin and its main rival Shiba Inu, have soared up the cryptocurrency price charts, as traders gamble that the buzz fueled by people like Tesla billionaire Elon Musk will translate to longer-term value.

According to cryptocurrency price data tracker CoinGecko, the price of omicron’s omic coin has risen from roughly $50 to almost $400 in the previous few days. Despite its rise, neither CoinGecko nor Crypto.com, a bitcoin and cryptocurrency exchange, have enough information on omicron to assign it a market valuation.

Only the contentious decentralized exchange SushiSwap may trade Omicron, which is touted as “a decentralized treasury-backed money protocol” built on the ethereum scaling technology Arbitrum and released just weeks ago.

Due to their decentralized nature, which means there is no central authority in charge, such exchanges are known to be frequently targeted by hacks, exploits, and so-called rug pulls, in which users’ cash is taken.

Also read: Bitcoin may surpass Mastercard in dollar value by 2026