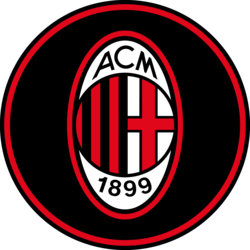 Today, I believe that a majority of you must be familiar with what cryptocurrency is and how exactly does it work. For those of you who are still not very familiar with the whole concept of virtual currencies, allow me a chance to briefly explain. Digital currencies have been around for quite some time now and have gained a lot of growth and popularity on a global level since it was first introduced. I have been following crypto for a long time now and one thing is for sure that, this industry of virtual assets is here to stay for long and is making progress on completely revolutionizing the entire global payment systems.

Just to back this statement, let me explain it in a simpler way. Some of you might remember when the industry was first introduced, there was a very limited clientele and people were not very intrigued to put in their money and were not eager to earn profits on their investment, which the platform advertised in order to lure in potential investors.

Not to mention that a few years ago, there were not many digital currencies for you to have chosen from in order to make an investment but if you look around today, you will be surprised to see that there are numerous cryptocurrencies to pick from and you actually have a choice to choose the currency which you think will be most beneficial for you and will provide you with good returns.

Speaking of cryptocurrencies completely changing the payment systems, it is worth mentioning that, a Mcdonald’s in Ell Salvatore has started accepting Bitcoin as an official mode of payment from its customer which shows how serious these assumptions are. Crypto has a few major features which include it being accessible, portable, volatile, uncertain, user friendly as well as very easy to use.

Talking about a lot of currencies available today, a few favored currencies include Ethereum, Binance coin, Bitcoin, Cardano, Dogecoin as well as Baby Doge. It is important for you to not confuse this with the fact that not all currencies launched achieve success and manage to find their way into the mainstream. A lot of currencies come up but due to lack of support, they go down soon after.

Reading so far, you must have gotten a fair idea about crypto and now you would be able to have a much better understanding of what we have with us today, AC Milan Fan Token. To know more, I suggest you start reading further!

Everything to know about ACM 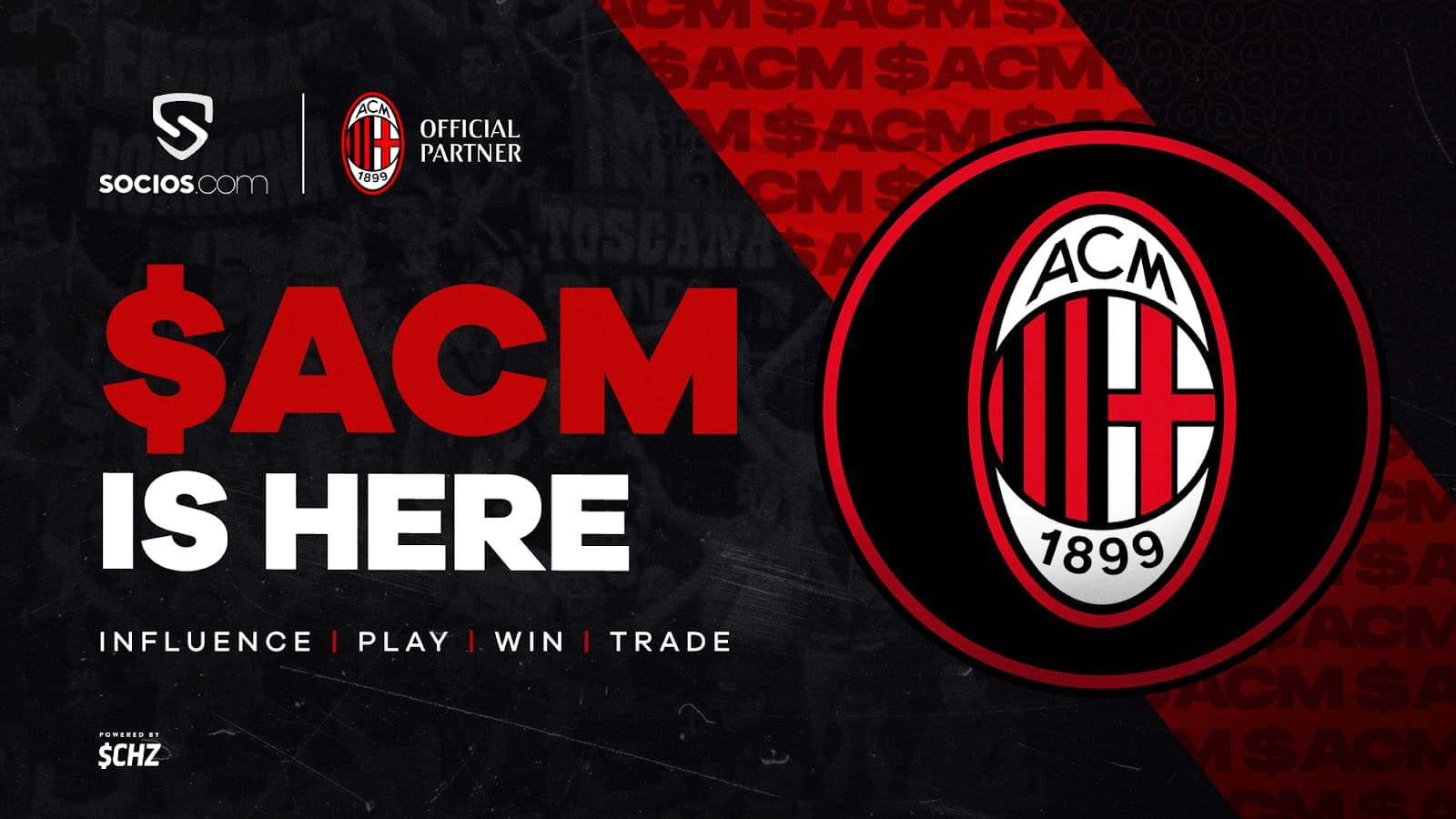 AC Milan Fan Token or as often referred to as ACM is nothing but a utility token that is known to give a tokenized share of influence on decisions of the club to AC Milan fans with the help of Socios servers and application. The AC Milan Fan Token is directly connected with the AC Milan Football Club. Not to mention, ACM is known to function on the Chiliz Chain that is utilized for rewards, governance as well as staking in order to earn Non-Fungible Tokens or as commonly known as (NFT), that is built upon the Ethereum network.

The ACM token acts as a membership key that enables users on the platform to compete for club recognition, exclusive rewards, and more. The token holders will be able to put forward their votes with the help of smart contracts on fan decision polls that are published by AC Milan and he is contractually bound to act as per the results derived from the polls.

Talked about Socios, some of you might be wondering what exactly is Socios? Let me help you with that. Socios is nothing but a reward and fan engagement platform for entertainment and sports organizations, powered by Chiliz, that is based on blockchain technology.

As we talked about earlier that the ACM token is based on the AC Milan Football club, I believe that not all of you must be familiar with the club and so let us talk about it first for you to have a much better understanding. Associazione Calcio Milan, often known as AC Milan or just Milan is a world-renowned professional football club In Milan, Italy.

On February 26th this year, the ACM Fan Token was launched, debuting on Binance which is known to be the largest cryptocurrency exchange in the world, thus, raising more than six million dollars in just a matter of few hours and a trading volume of nearly fifty million dollars was seen in the initial thirty minutes. As a result, “The listing of the $ACM Fan Token on Binance has proved to be a remarkably successful strategic move”, says Casper Stylsvig, chief revenue officer of AC Milan. 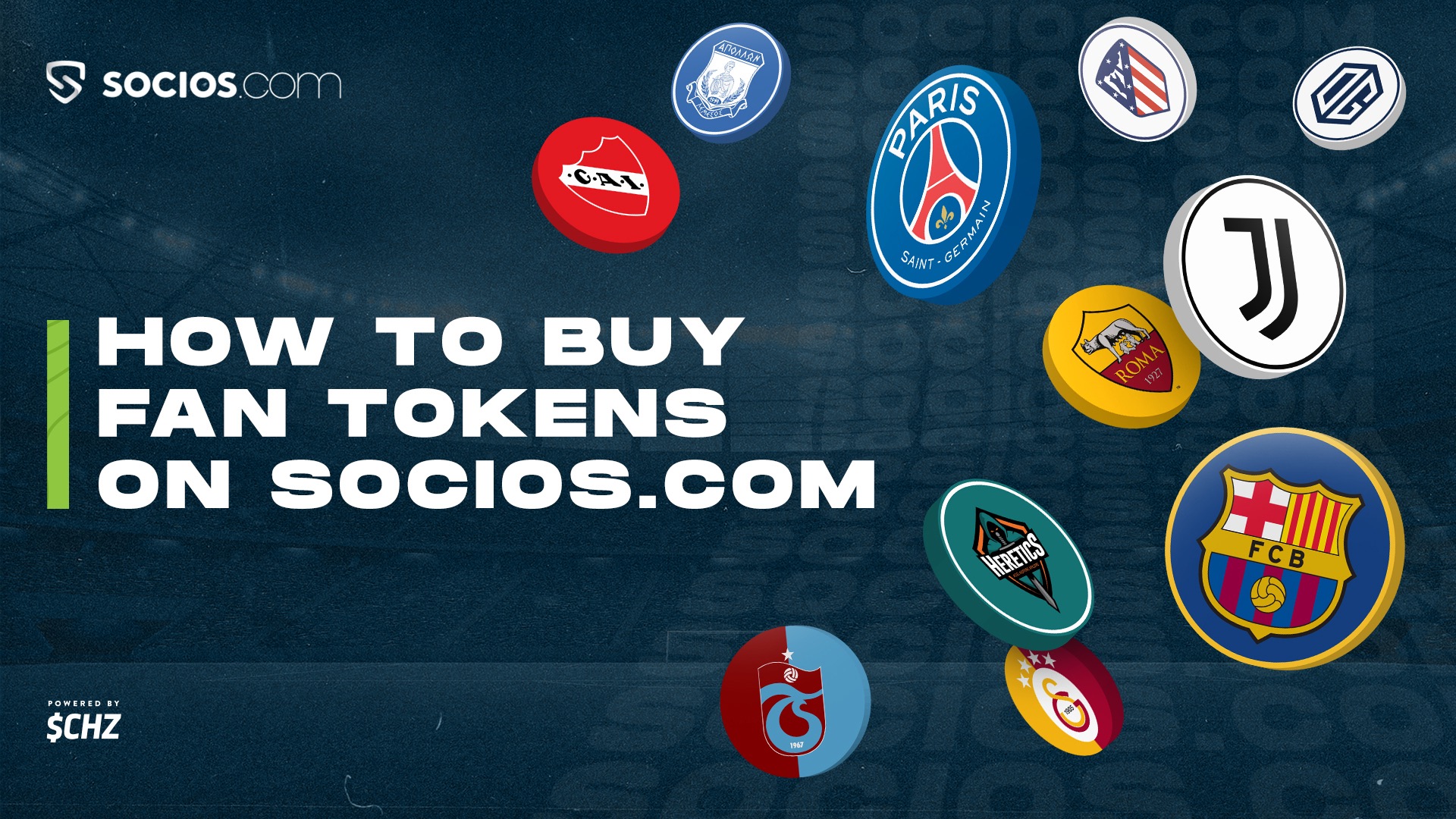 As previously mentioned, the Chiliz Chain is a Proof-of-Authority-based sidechain that is developed on Ethereum, which is often used for governance, rewards, and staking. The token holders can enjoy a wide range of club benefits such as being able to interact with the Socios platform for various purposes including voting on polls, chatting and connect with like-minded users, competing in quizzes and contests, earn VIP rewards as well as gain “super-fan” recognition of course.

AC Milan is one of the other 23 sporting firms, who have issued their token through the Chiliz-driven platform. Talking of clubs issuing tokens, some of the popular football clubs that have their own crypto tokens include Juventus, AC Milan, Atlético de Madrid, FC Barcelona, Paris Saint-Germain, AS Roma as well as Galatasaray and Trabzonspor.

Talking about the statistics, the ACM token had a total supply of nearly 20,000,000, out of which about 2,000,157 tokens were distributed to club fans at the very beginning through a Fan Token Offering. The remaining tokens are held by AC Milan himself and can be collected by purchasing directly on exchanges as well as by participating in the community. However, the supply is likely to be reduced in the near future as per the token burning plans of the Socios platform and AC Milan. 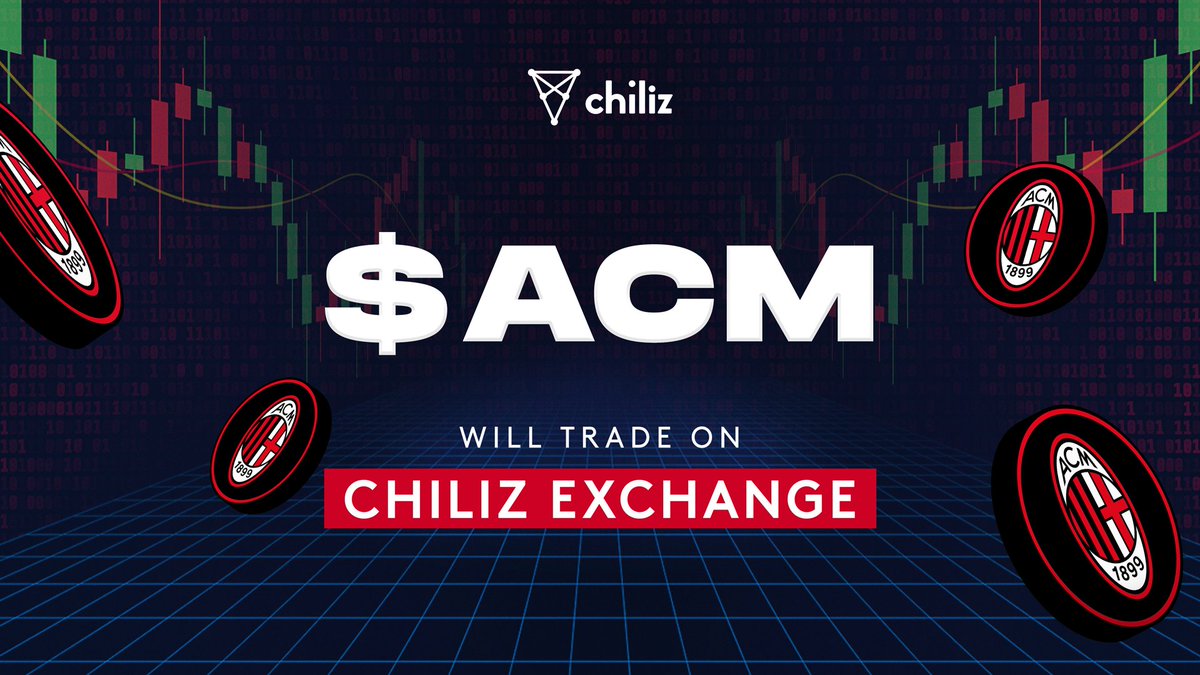 The tokens held by Milan also have a linear vesting plan of nearly six years on a monthly basis, out of which  4,000,000 ACM tokens are said to be released in the first year and the remaining 3,200,000 ACM tokens on an annual basis for the next five years from February 2021.

In addition to this, AC Milan fan Token is continuing to make progress and has some strategies for community growth such as continuing to build governance voting polls for holders of the currency, engaging with the community on a regular basis through social channels as well as publishing a few articles related to the token through several mainstream media outlets.

Since now you have a basic understanding of AC Milan Fan Token, you might be thinking, whether or not you should consider investing in ACM? let find out, shall we! 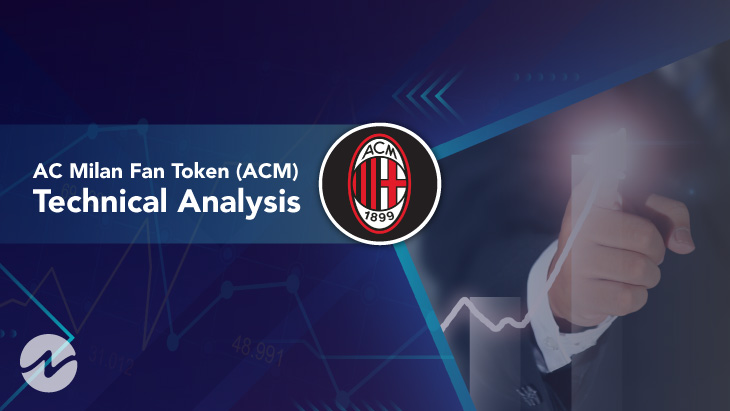 As of today, the price of AC Milan Fan Token is nearly 11.67 US dollars with and twenty-four hours trading volume of about 277,577,228 US dollars. In just the past twenty-four hours the price of the token has gone uphill by almost 5.07 percent and with a current market cap of about 36,663,811 US dollars. The AC Milan Fan Token is presently placed at #621 position on the CoiMarketCap rankings.

Also, it is worth mentioning that, the current circulating supply of the token is 3,141,172 ACM coins but unfortunately, the maximum lifetime supply is not yet available. In just a week’s time, the value of the AC Milan Fan Token has gone up by 43.14 percent.

Seeing these numbers, one thing is for sure that unlike most other currencies available today in the marketplace, AC Milan’s Fan token is one of those tokens which can be seen progressing at a quick pace. Keeping all of this in mind and as per the analysis done on its past performance since its launch last year in March 2020, AC Milan Fan Token is expected to earn profits and it is likely to hit its all-time high again in the near future sometime.

Reading so far, you might have understood what AC Milan Fan Token is all about, and thus, you should be able to figure out on your own, whether or not investing in ACM is the right thing for you to do. But, it is very crucial to remember the fact that, just like any other virtual currency in the marketplace, AC Milan Fan Token too has its own downsides and risks involved. 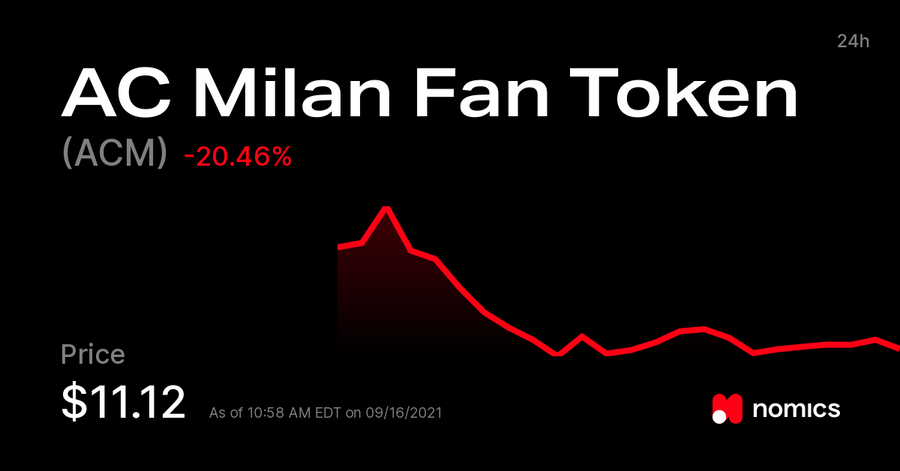 As we talked about at the very beginning of this article, the cryptocurrency marketplace is considered to be extremely uncertain as well as volatile, which means that price fluctuations of a particular token can happen unexpectedly and all of a sudden. Therefore, It is advised by global crypto experts that, you should invest only if you are willing and are able to certain risks and bear any and all losses if necessary.

For those of you wondering, what all crypto exchanges can you use in order to trade ACM? Allow me a chance to help you with that. The top virtual currency exchanges today for investing or trading AC Milan Fan Token include Mandala Exchange, BKEX, HitBTC, Pionex as well as the most active and popular crypto exchange in the world, Binance.

In conclusion, I believe that AC Milan Fan Token can prove to be a worthy investment, and seeing what it offers and its future plans, I think if not now then in the near future, the token will help you yield good returns.

What are your thoughts on AC Milan Fan Token? Do let us know in the comments below. To know more about various cryptocurrencies, do check out other articles we have on our website. Thank you for your time & if you found our content informative, do share it with your investor friends!

Also read: COVER Protocol: Everything you need to know