AI And Robotics To Make Robots More Aware of Humans

Most of the industries now use robots to carry out the majority of the tasks that are considered to be quite dangerous or require a high level of precision. Robots are required to carry out operations in areas which contain weather conditions too harsh for humans to bear. There have been many developments in this sector due to the advancement in technology but some areas still remain untouched.

Robots are quite useful when used by industries but they still lack the context of the situation, such as understanding the work environment and the circumstances and also being able to predict the next move of the people.

In order to address this problem, Hongyi Liu who is a researcher at KTH Royal Institute of Technology has come up with a new system which will allow the robots with context awareness so that they can work alongside with humans on assembly lines in a much more efficient way. The details about this research are published in the journal, Robotics and Computer-Integrated Manufacturing and are co-authored by Lihui Wang.

According to Hongyi Liu, this human robot collaboration system is capable of identifying each worker it works with and also the person’s skeleton model. With the help of this information, the context aware robot system is able to make out the workers pose and can even predict what would be their next pose. This allows the robot to gain a context to be aware of while carrying out interactions.

Hongyi Liu said, “Under the ISO standard and technical specification, when a human approaches a robot it slows down, and if he or she comes close enough it will stop. If the person moves away it resumes. That’s a pretty low level of context awareness.”

While adding further they said, “It jeopardizes efficiency. Production is slowed and humans cannot work closely to robots.”

According to Liu the system makes use of artificial intelligence (AI) which requires less computational power and smaller datasets compared to the traditional machine learning methods.

The method of machine learning used for this technique is known as transfer learning. Transfer learning allows the system to reuse the knowledge developed through training before it is adapted into an operational model. 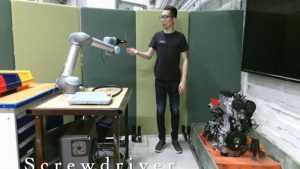 According to Liu, this context aware robot system can be compared to a self-driving car that is able to detect how long a stoplight has been red while anticipating moving again. The system had to undergo experiments which showed that when provided with context, the robot was able to operate more safely and more efficiently without slowing down the pace of production.

In one such tests performed, the robot’s path of arm was unexpectedly blocked by someone’s hand but the robot did not stop. Instead, the robot adjusted and predicted the future trajectory of the hand and also the arm moved around the hand.

Liu said, “This is safety not just from the technical point of view in avoiding collisions, but being able to recognize the context of the assembly line. This gives an additional layer of safety.”

According to Liu the technology is ahead of today’s ISO standards requirements set for collaborative robot study. ISO stands for International Organisation for Standards. This means the implementation of this technology is possible only with industrial action. They also mention that with context awareness the robots perform with better efficiency.