Robotics field is very dynamic in nature. It is always changing and evolving. We always get to see some new innovations and new upgrades in this field. Recently, a new robot has been developed named Dyret which means ‘The Animal’ in Norwegian. Details about this robot are published in journal ‘Nature Machine Intelligence’.

Dyret is a quadruped robot and is capable of adjusting its leg’s length depending on the surface. It can also learn what works best and is more prepared the next time when deployed in an unknown environment.

The robot is a result of collective efforts from Tønnes Nygaard who is currently serving as a senior lecturer at UiO’s Department of Informatics along with robot researchers at The Commonwealth Scientific and Industrial Research Organisation (CSIRO) in Australia for over half a year. The CSIRO specialises in testing self learning robots outdoors.

Tønnes Nygaard said, “We have shown the benefits of allowing a robot to continuously adapt its body shape. Our physical robot also proves that this can easily be done with today’s technology.”

Kyrre Glette who is an associate professor said that, “We have seen that a mechanism to adapt the body shape is useful for our robot, and we believe this could apply to other robot designs too.”

Dyret by changing its leg’s length can automatically transition into different body shapes. Morphologically adaptive robots are capable of operating in unpredictable environments and also solve new tasks without any need of redesigning or rebuilding every time they come across something unexpected. 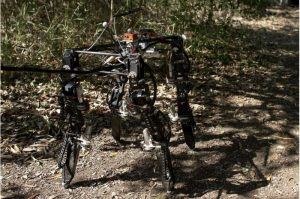 Tønnes Nygaard explained that, “The robot uses a camera to see how rough the terrain is, and it uses sensors in the legs to feel how hard the walking surface is.”

While adding further they said, “The robot continuously learns about the environment it’s walking on and, combined with the knowledge it gained indoors in the controlled environment, uses this to adapt its body.”

Dyret had never seen grass before but when it was asked to walk on grass, it was able to learn quickly on Australian grass and also knew what would be the ideal leg length for this task. Before this, Dyret has only trained on concrete, sand and gravel. Grass can be tricky as in nature there are a lot of holes and tufts which can trap the long legs of this robot. But on concrete, Dyret can stretch its legs and also “run”. Not only that, it can also adapt when it gets damaged while facing unexpected obstacles.

Nygaard said that, “Using our technology, the robot is able to adapt to one of its legs becoming weaker or breaking. It can learn how to recover, whether through limping or decreasing the length of the other three legs.”

They also added, “This is beneficial in environments where the robot might face many unexpected challenges. This includes search and rescue operations, but also agriculture where there is a wide range of challenging surfaces and weather conditions.”

In its current stage, the robot is not yet ready to carry out major tasks however Nygaard can see it being useful for several purposes in the future. According to Nygaard this robot can be used for exploring mines where the conditions are difficult for humans to get into, if the technology permits it can even go to Mars or carry out some missions in space.