When it comes to having a successful blockchain project, real-world acceptance is everything, and Algorand (ALGO), a pure proof-of-stake protocol striving to become the go-to base layer for the global financial industry, has benefited from a recent surge in engagement.

Since bottoming out at $0.67 on July 20, according to data from Cointelegraph Markets Pro and TradingView, the price of ALGO has soared 268 percent to a daily high of $2.47 on Sept. 9, with a record-high $4.83 billion in 24-hour trading volume.

Following El Salvador’s announcement that Algorand is officially recognized as legal tender, the price and trading volume for the currency skyrocketed. El Salvador has also picked Algorand’s blockchain to help build its own blockchain infrastructure.

Because of its work on central bank digital currencies, the Algorand network has gradually received more interest from larger institutions and governments. Furthermore, the project has been selected to host prominent stablecoins such as USD Coin (USDC) and Tether (USDT)

A second element driving ALGO’s price is the Algorand Foundation’s recent efforts to get the community more involved with the project and active on the network. The project is in the process of rolling out governance tools for token holders, which will go live on Oct. 1 and give users a greater say in the platform’s future development. 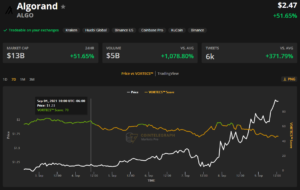 It uses a two-layer method to handle both standard and sophisticated DeFi transactions. Additionally, when new blocks are created, people who own the ALGO, the native coin, are rewarded. The financing will concentrate on expanding the Algorand platform’s DeFi ecosystem. DeFi is an emerging subset of crypto that focuses on decentralized financial instruments including lending, borrowing, and trading with synthetic assets. DeFi gained traction on the Ethereum blockchain, but other blockchains are hoping to follow in its footsteps.

The investment will be distributed in the form of ALGO tokens to potential projects. It comes in the form of 150 million ALGO, which is currently worth $334 million. Harmony, a blockchain platform for powering Ethereum applications, announced a $300 million fund today as well, not to be outdone. Its primary goal is to attract companies that are already functioning on other blockchains, such as Ethereum, as well as scaling solutions like xDai and Polygon.