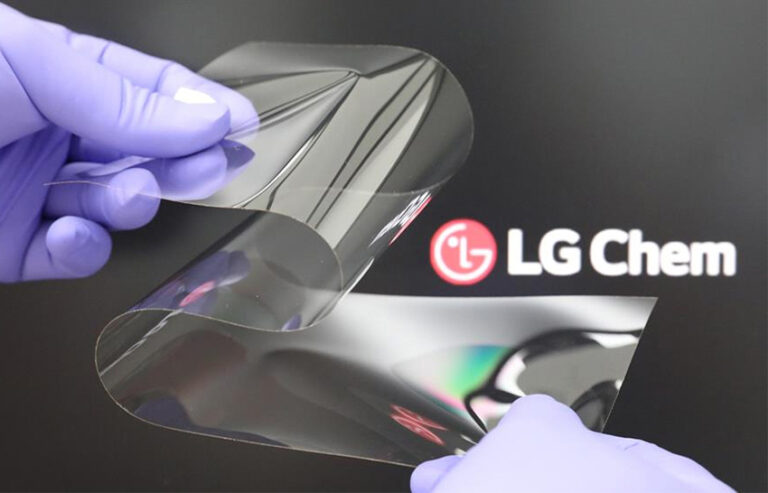 Patently Apple has published a number of patents relating to future foldable iPhones and iPad/MacBooks in 2021 alone, with many more covered in our archives over the last few years.

Samsung and Corning have developed foldable glass, which will be distributed to Chinese smartphone manufacturers this year and into the future.

While Apple and Samsung may collaborate on flexible screens in the future, Apple supplier LG Chem made their own significant announcement on folding glass today.

As it prepares to enter the next-generation materials market in earnest, LG announced the development of new technologies that may be used for foldable displays employing new materials technologies and its collected coating technologies.

LG Chem stated that it had developed the ‘Real Folding Window,’ a cover window for foldable devices that used specially developed coating materials to make the surface as durable as glass while the folding components remained as flexible as plastic.

Cover windows are fundamental materials on the outside of foldable devices that protect the display from harm while also providing clear visuals.

A spokesperson from LG Chem said that

“Unlike existing polyimide films and tempered glass-type materials, the cover window that applied LG Chem’s new coating technologies will maximize flexibility, while also providing optimized solutions for foldable phones such as making improvements to chronic issues like fold impressions on the connecting part of the screen.”

Not only is it durable and transparent, but it also has curved features that can be folded flexibly. This could be relevant to a future iDevice with an extensible, flexible display, which we discussed last week.

LG Chem developed the ‘Real Folding Window,’ which coated a new substance on both sides of PET film, a form of thin plastic, with a thickness of a few dozen micrometers (m) to improve heat resistance and mechanical qualities.

When compared to conventional polyimide film, its price competitiveness is superior, and its remarkable flexibility ensures that durability is maintained even when folded over 200,000 times. The fold lines that appear on the folding parts of the screen have also been significantly improved by LG Chem.

LG Chem is also working on ways to create a thin ‘Real Folding Window’ that is made entirely of coatings and does not require PET sheets (Polymer films). As we mentioned earlier in Apple’s patent, coating-method goods without PET films are expected to be used in foldable phones and rollable display devices.

“Through the Real Folding Window that we newly developed, we were able to take a step closer to resolving the pain points of customers, and we have already received proposals for joint projects from multiple clients.”

Microsoft and Intel are currently collaborating with Samsung on the “Horseshoe Bend Project,” which will bring 17″ folding display tablets to market that can also be used as foldable notebooks.