As online sales increase, so does Amazon’s profit

American multinational technology company Amazon recently announced that its quarterly profit has tripled as online sales increased. The company’s total revenue was reported to be $108.5 billion, which is close to a 44% increase from the same time in 2020. Much of this increase is attributed to the current COVID-19 pandemic, which resulted in a trend of online shopping as opposed to real-world stores.

The pandemic means that Amazon has seen a boom in usage and expansion across numerous types of industries and customers, including startups and enterprises. During COVID, many enterprises, especially those that were either small or up-and-coming, struggled with managing their own technology and enterprises and decided to partner with Amazon. This allows them to move into the internet cloud, providing them with increased speed of innovation, better capability, and more cost-efficient methods of production.

This was most prominent in the Amazon Web Services (AWS) unit, where the services and data that are hosted in the cloud saw their quarterly revenue increase to $13.5 billion, as compared to $10.2 billion during the same period last year. The trend is expected to continue even when the pandemic is over.

Furthermore, several well-known sports leagues announced new partnerships with Amazon in the last quarter of 2020. These include the PGA Tour, Formula One, the National Hockey League, and the German professional association football league, Bundesliga.

Its streaming and delivery service, Amazon Prime, has also had great success. More than 200 million people around the world pay for a membership of Amazon Prime, which provides fast and free delivery of goods and services, coupled with a streaming television service that competes with Netflix. Additionally, Prime has had one of its most successful awards seasons to date, particularly when it comes to originally produced content. Original titles that are receiving critical acclaim include “The Sound of Metal,” “One Night in Miami…”, and “Borat: Subsequent Moviefilm.” There has been an increase of 175 million members of Prime only in the last year, while the number of streaming hours has increased by 70%. Prime also received 12 nominations and 2 wins at the Academy Awards. 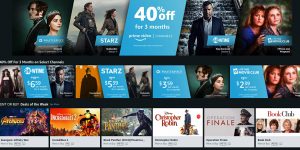 Amazon has continued to show consistent amounts of growth even in the face of increasing competition, particularly from both No. 2 Microsoft Azure and No. 3 Google Cloud Platform. This indicates that while the market for internet clouds is still in its early stages, there is plenty of space for growth and expansion. The high degree of competition means that there will be increased levels of research, development, and innovation.

Despite the fact that this is good news for Amazon, these positive results have emerged amid widespread criticism and concern over the increasing amount of influence that Big Tech is beginning to have over several significant economic sectors, a trend which is only increasing during the pandemic.