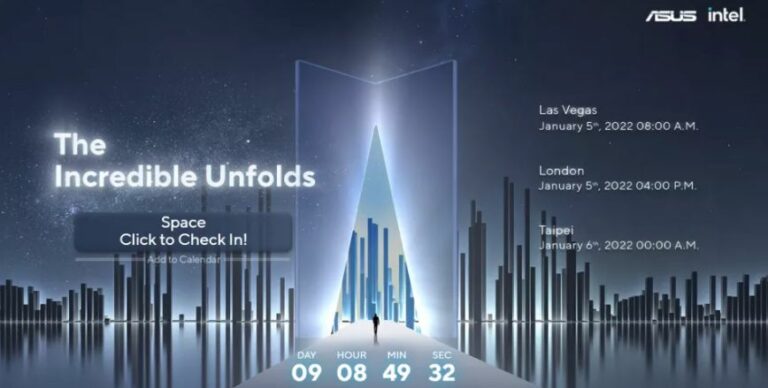 The year 2022 is about to begin, and as we all know, there are a slew of new product launches planned. This long line is going to become much longer, as CES 2022, which kicks out at the beginning of the year, will also feature a slew of new consumer electronics devices.

Asus is expected to release a foldable laptop on January 5 as part of these launches. This appears to be the case based on a teaser that the corporation just released on Twitter.

A link in the caption also leads to a separate website with a silhouette of a probable foldable item, which we believe is a foldable laptop. But there’s nothing to take from this because the details are being kept under wraps until the debut, which isn’t far away.

An incredible journey lies ahead of us, and the secret is waiting to be decoded right on the boarding pass. Follow the hint to make the unknown known.#ASUS invites the whole world to join us in unfolding the next chapter.👉 https://t.co/dh8PBvFes0#CES2022 #TheIncredibleUnfolds pic.twitter.com/2ppTjyS0sy

Asus foldable laptop – Here is what we know

If Asus brings a foldable laptop to the show, it could be the start of a whole new category. Asus, on the other hand, will not be the first in this category, since Lenovo released the first folding screen laptop, the ThinkPad X1 Fold, in 2020.

In the same year, Dell unveiled Ori, a prototype foldable PC, but only Lenovo’s made it to shop shelves. However, the addition of yet another company to the fray simply indicates that a new battle may be on the horizon.

We’ve seen foldable cellphones before, but it appears that the foldable display technology has now made its way into PCs to demonstrate its power.

Surprisingly, Asus is making use of the world’s largest consumer electronics trade exhibition to announce its accomplishments.

For the time being, we can’t rule out the possibility of using covers for a foldable laptop, but given the rising interest of corporations in always-on connected laptops, it’s reasonable to speculate what Asus may bring to the table.

Always-Connected PCs (AC-PCs) make use of cellular data SIM cards to provide internet access regardless of location. These merge the processing power of a smartphone with the portability of a laptop computer. Laptops with foldable screens, we believe, would then make the always-connected concept more accessible to consumers.

When will the Asus Foldable laptop launched officially?

Laptops are becoming more ultraportable than ever before, and a foldable design might make them even more mobile, making them an obvious choice for students and businesses.

At the exhibition, which kicks off on January 5, we expect Asus to shed more light on the subject. It’s worth noting that the rumored foldable laptop will be unveiled the day after the firm upgrades its gaming laptop lineup at CES.