Baby Musk: Everything you need to know 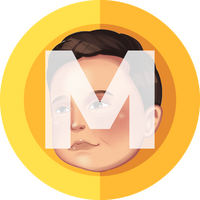 We have been in a world full of virtual currencies for quite some time now and ever since the industry was first introduced, it has been gaining quite a lot of support and has been more than successful in luring in potential investors from all across the globe. Not just that, the crypto world has had a surge in its overall growth and popularity recently, thus helping it to reach greater heights!

To begin with, cryptocurrencies are simply blockchain-based platforms that are said to be decentralized to their very core. Being decentralized, the industry becomes more than capable of stepping outside the overall control and jurisdiction of central authorities and can work freely without any unnecessary government interference as well.

This virtual asset of yours can also be used for a variety of purposes including the purchase and sale of goods and services as well as for the purpose of trade and exchange over cryptocurrency exchanges online. Though when the industry was first introduced globally, there were very few currencies you could have chosen from, and frankly, not many people were interested to be a part of it either as they were very skeptical with respect to the return on their investments and the safety of their money as well.

Speaking of a lot of currencies available today in the marketplace, some of the most popular ones worth investing in include Bitcoin, PanacakeSwap, Binance Coin, Polkadot, Ethereum, Dogecoin, Baby Doge as well as EverGrow Coin to name just a few of course.

Now, for some of you wondering, how did it happen so rapidly? Let me tell you that, some of the major contributing factors for this huge success of the industry include its ease of use, negligible response time, high-profit margins, volatility, intuitive nature, real-time updates, as well as the convenience it offers of course.

Now that you have a brief backstory about the crypto world, you will be able to have a much better understanding of what we have with us today, Baby Musk. To know more, I suggest you read further!

Everything to know about Baby Musk (BABYMUSK) 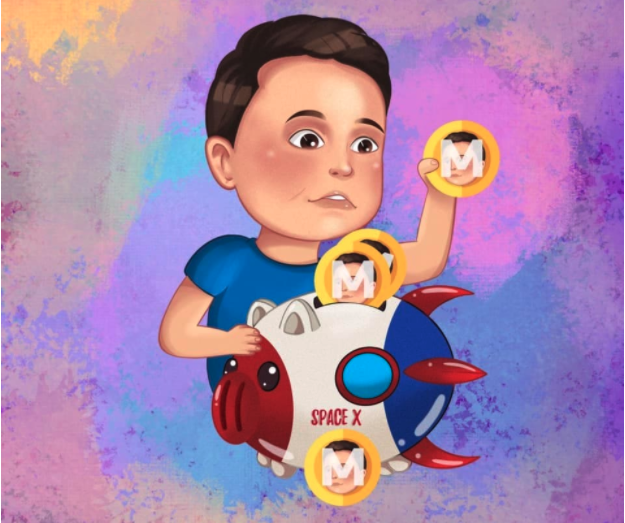 Baby Musk or as commonly referred to as BABYMUSK, as the name suggests is nothing but simply a tribute to Elon Musk, the CEO of Tesla. Not just that, the token is said to have been made with the sole purpose of catching Musk’s attention in order to convince him into joining the said project.

Cryptocurrency-based scams are really painful for investors and it seems they are becoming more common these days. For some of you wondering why so? Allow me a chance to explain. Much more people now have started embracing virtual assets than ever before and as a result, scammers have a pool of targets ripe for picking.

Also, despite of investors being diligent while researching new projects in the marketplace, promises of big gains do look enticing and there are always possibilities that one could get caught up in all this.

Baby Musk Coin or BABYMUSK is one such currency that reminds us of this harsh reality today, as the token plunges nearly a hundred percent soon after its launch, which we’ll come to in a bit. First, let’s have a look at what it really is. To begin with, Baby Musk is an open-source BEP-20 token that is known to have been built in order to reward its holders.

In addition to this, for each transaction over the network, holders will be getting a certain percentage of reward in BTC and some of it will also go to the liquidity pool in or to maximize the overall stability of the coin.

Basically, all you need to do is simply hold Baby Musk in your wallet and see your BTC grow. As mentioned, the Baby Musk community is said to have a primary objective of gaining Elon’s attention so that he will join the project, which I am sure you might already know, will be a huge win for the project as well as its so-called community.

Before moving on any further, it is worth noting that, BABYMUSK is said to be the native utility token of Baby Musk, which as a matter of fact can be used for a variety of purposes on the platform itself. Apart from this, according to recent reports, the Baby Musk team has started to inform the community about its achievement of over two million dollars during initial coin offering (ICO) sales, which the team further plans on using into the marketing campaign, in an attempt to spread the word across the industry. 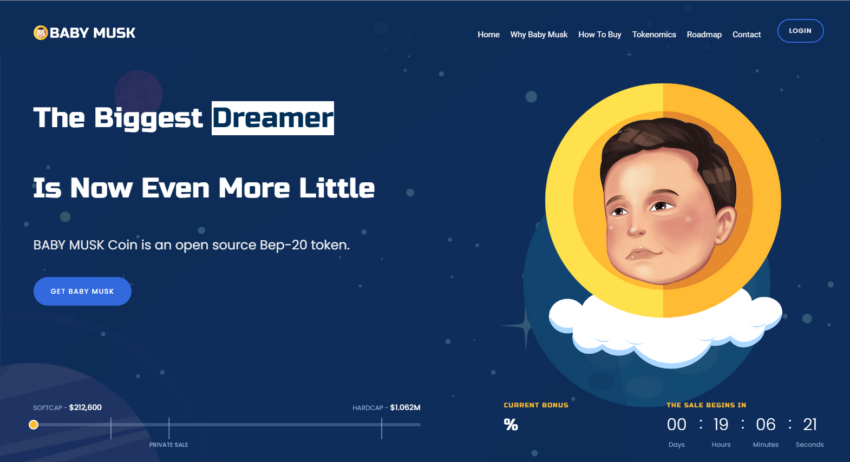 Also, know that, on February 28th, Baby Musk was launched on several decentralized exchanges and that the price of the token witnessed a hundred percent gain within the very first hour of trading. Furthermore, the Baby Musk Coin is said to currently be set up for the listings on major crypto exchanges in the marketplace and is one such rare project which has already been listed on CoinMarketCap even before it was officially launched.

As talked about earlier, Baby Musk Coin is also the very first and the only one in the industry to have launched a viral dance known as Baby Musk Dance, which has over 150k views on the popular video streaming app, YouTube.

Other than this, the team behind this project has also managed to develop an entirely decentralized index fund for virtual currencies and in an attempt to simplify decentralized fiancé (DeFi) and make it accessible for new crypto enthusiasts, it has also created a Baby Musk Swap, where each swap, farm, and stake will be as easy as downloading an application.

On a similar note, there is also a Baby Musk wallet, which is the only one being able to seamlessly integrate with ETF as well as Baby Musk Swap discussed earlier. Also, since we have been talking quite a lot about the Baby Musk community, it is worth noting that, in less than one month, the platform has already managed to see some of the most impressive numbers in the Baby Coin’s communities with more than 60,000 members on telegram, 40,000 followers on Twitter as well as 155,000 subscribers on YouTube, engaging with the project on a daily basis.

Lastly, Baby Musk is known to trout itself as simply ‘the biggest dreamer’ and is one such project which has been launched on several decentralized exchanges and is awaiting listing on some of the major crypto exchanges out there. While investors are waiting, there’s a growing amount of interest that has been constantly building on social media right now.

Now that we have talked much about Baby Musk, some of you must be wondering, whether or not it is a good idea to invest in the platform? If that’s the case, then let’s find out, shall we? Reading so far, you must have gotten a fair understanding of the platform and by now, you should be able to figure out on your own whether or not investing in Baby Musk Coin is the right thing for you to do. Seeing what it has to offer when combined with its performance in the recent past as well as its plans for the near future, I certainly believe that Baby Musk can prove to be a risky investment in the near future, which is likely to provide you with fewer returns and it is a possibility that your current investment may decrease in value. But again, nothing can be said or sure! As mentioned at the very beginning, crypto is a highly volatile marketplace and is extremely uncertain. Thus, It is very important for you to understand the fact that just like any other currency in the crypto marketplace, Baby Musk does have its own risks as well and you should invest only if you are willing to take those risks and bear any and all losses if at all necessary.

If you are wondering, where can you buy Baby Musk Coin? Let me help you with that. Currently, Baby Musk Coin is not really available on all major crypto exchanges, and some virtual currencies are really harder to obtain as and when compared to others in the marketplace and unfortunately, Baby Musk is one of them. As of now, being a relatively new token, BABYMUSK is only available on PancakeSwap but, I believe it should soon be listed on all major crypto exchanges or at least we can hope it would!

In conclusion, what are your thoughts on Baby Musk Coin? Do let us know in the comments area below. To know more about various cryptocurrencies, do check out other articles we have on our website. Thank you for your time & if you found our content informative, do share it with your investor friends!