Bay Area offers tiny bunk bed ‘pods’ for $800 a month This comes in during a serious Bay Area housing crisis. 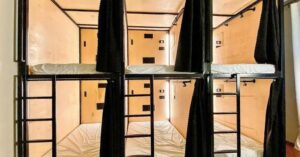 For long now, Bay Area has been experiencing an extreme housing crisis. Evidently, housing in the locality comes across as way more than just ‘unaffordable’ now. Resultantly, companies have joined the competition to the bottom during this situation. They have been visibly putting up offers for the smallest conceivable accommodation for a rent that is still-considerably steep.

Local startup Brownstone Shared Housing has currently come up with such a provision as the issue persists. The company is offering fascinatingly miniature bunk bed pods at a rate of $800 per month. In this space, residents would have to reside while sharing it with 13 more roommates. The first ones to report on this development was Business Insider.

The local startup has gone on to provide a fair amount of details about this form of lodging on its website. Moreover, it claims that these tiny bunk pods are ‘the future of share housing.’ They seem to be evidently bragging about how each of its pods has ‘40 percent more space than bunk beds.’

Clearly, this form of housing offered by the company is a rather expensive version of a prison cell. The only exception lies in the fact that it has the provision of WiFi and electrical outlets.

Housing crisis and the ‘pod life’:

This particular option of living does not appear much cheaper per square foot than the conventional options of living such as normal flats. Currently, an average studio flat would cost about $2,400 in the vicinity.

But, in the opinion of Christina Lennox, the co-founder of Brownstone Shared Housing, all people now need is a tiny pod. In fact, she went off to live in such a pod herself since 2021 in order to show her dedication. She pointed out how the wood enables ‘relaxation, rather than like going inside’ what looks like a futuristic ‘plastic box.’ Lennox added how it had a ‘different feel,’ specifying how it is ‘calming and soothing for people.’

The startup somehow managed to put in 14 pods into what looks like a single family, three bedroom household. Clearly, this appears to be the ultimate, depressing result of the housing crisis the tech metropolis is going through currently. Latest findings show how presently there isn’t any affordable housing available for the massive population of low income households in the Bay Area.

Various users on Antiwork subreddit, visibly  pointed out how these tiny pods are clearly not a great solution, either. One pointed how it is clearly ‘not a home,’ and how that they had lived ‘like that… on a warship.’

“This is ‘convincing a mouse that a mouse trap is free real estate’ level of malignant,” another argued.