Mahesh Babu and his wife Mrs. Namrata Shirodkar, ran into billionaire and Microsoft founder, Mr. Bill Gates recently on June the 29th in New York, USA. The predominantly South Indian actor took to his Twitter account that very day to share to share to the world that he met Mr. Bill Gates and attached a photo of the three of them.

His caption stated, that they had the pleasure to meet Mr. Bill Gates who is one of the greatest visionaries that has ever set foot on this earth. And yet, he is very humble and down to earth. He ended his Tweet by calling him an inspiration. 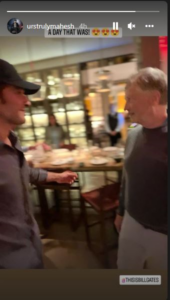 The tweet has been up for just over two days and has gone viral as it has garnered well over 85,000 likes and it is still steadily climbing. It has even racked up almost 12,000 retweets and over 502 quote tweets. However, The face of the Telugu film industry is not stranger with his content going viral.

Mr. Mahesh Babu and his wife and currently on a vacation at the United States of America along with their two kids. He is one of the most successful actors of his generation and has been one of the primary driving forces for the boom of the Telugu cinema industry.

The business mogul, philanthropist, and billionaire then retweeted the actor’s post. His caption stated, being in New York is always fun. You never know you’d run in to! He ended his caption by saying that it was a pleasure meeting the both of them. His tweet has had a faster rate of likes surprisingly as in just 18 hours, the tweet has been able to rack up almost 40,000 likes. It is also close to hitting 10,000 retweets and almost 1000 quote tweets.

Supporters of both of both the hero of Sarileru Neekevvaru and the 4th richest person in the world flocked in crowds to the comment section of both the posts speaking of what an amazing cross over it is. Some people commented stating that the next person on the list should be President Joe Biden, while another tweeted that he is famous all over the world.

Mr. Mahesh Babu and his family have been on vacation for the past two months. After a long tour across various countries in Europe, the family is now travelling in the United States of America. His daughter, Sitara has been posting updates about the European leg of the travel, and now Mr. Mahesh Babu has been sharing about his American trip on various social media platforms.