Bitcoin Daily Transaction Volumes Are Up 94% According to On-Chain Data, Rally May Not Be Over Just Yet

Following the surge of the previous week, Bitcoin has recently lost traction. The digital asset had gained more than 20%, and the entire market had followed suit, gaining massively across the board. For the first time in a decade, Bitcoin has closed in the green for nine days in a row. As the velocity of the cryptocurrency has slowed, the price has dropped in a succession of declines, pushing the price lower.

For the first time in almost a month, the asset had risen above $42,000. The rise appears to be coming to an end as a result of this slowing. On-chain data, on the other hand, indicates that bitcoin is gaining traction in other areas. 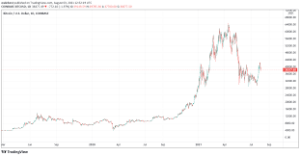 According to on-chain data analysis, bitcoin transaction volumes have increased in the last week. From $4.7 billion per day to $9.1 billion per day, a 94 percent increase. demonstrating that, while the price has slowed, the volume has not.

Bitcoin is being aggressively accumulated by smallholders.

Small-time bitcoin holders are accumulating the digital commodity even more aggressively than whales, according to Glass node research. These wallets, often known as “Shrimp and Crab” wallets, are those that have less than 10 BTC in their balance. Small-time holders now possess 13.8 percent of the entire bitcoin supply for the first time.

Wallets have been accumulating coins since May, according to the trends, following the market crash that saw assets lose up to 50% of their value in a short period of time. As the market has dipped and plummeted over the months, wallets holding less than 10 BTC have steadily expanded their holdings.

Coin maturation and accumulation patterns continue to point optimistic, although these bullish signs can take time to mature in the market. Small investors who amass a larger number of coins have more faith in the market. As more and more investors opt to keep their coins rather than sell them, the market is becoming more volatile.

Following the price drop at the start of the week, Bitcoin remains stuck in the $38,000 zone. The digital asset’s momentum is still low, and it appears that the rest of the market is seeking to distance itself from the pioneer cryptocurrency.

In the last 24 hours, the coin has lost over $1,000. The price of the coin has dropped 3.64 percent in the last day. According to CoinMarketCap, trading volumes have also decreased by 11%.

Bitcoin is now trading at $38,358, with a market capitalization of almost $720 billion at the time of writing.