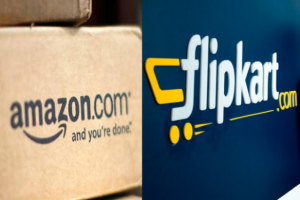 June 24, 2016: Flipkart has faced another blow from Amazon India as it tops the overall web traffic surpassing it,  including both PCs and mobile, according to data gathered by Kotak Institutional Equities from web traffic analytics company SimilarWeb.

Flipkart has been suffering in terms of its mobile ranking, as it two places behind Amazon from falling to number 16 from top 10 in February.

As per data of App Annie, a mobile-app analytics company, Amazon took the lead in June and got successful in getting 14th position in the play store.

The figures clearly indicates the losing of Flipkart’s mobile dominance owing to a reduction in its app downloads and other attributes such as, frequency of interaction with the app, number and quality of ratings, number of backlinks, and number of uninstalls.

Flipkart mobile downloads reached 50 mn by feb, whereas amazon still lies within the range of 10-50Mn.

Amazon took a lead over Snapdeal in March to become the second-largest online marketplace by shipments.

Flipkart’s earlier attempts to launch a mobile only version is the primary factor behind the fall of web visits.