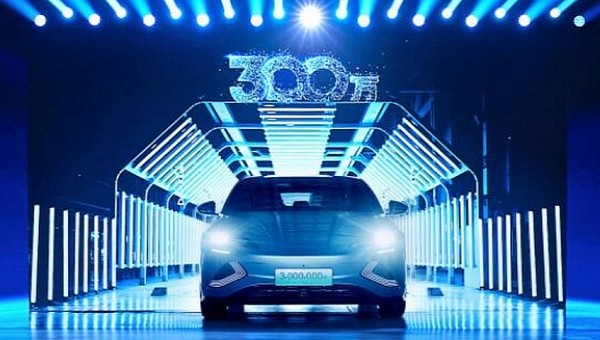 BYD announced that the company delivered its three millionth vehicle, which happens to be a pure electric vehicle. The 30th lakh model delivered by the Chinese automaker is a BYD Seal, one of its highly anticipated electric sedans. The automaker claimed that it took 13 years to deliver its first one million new energy vehicles, while the next one million new energy vehicles were delivered in just one year. What’s more interesting is that it took just six months to reach from two million to three million milestones.

The automaker claims that this pace of growth shows how the automaker is actively promoting the NEVs. Also Read : Kia EV6 deliveries hit 200 so far; more units planned for the year The car manufacturer also claimed that it will build up its brand matrix with five different sub-brands, which are Dynasty, Ocean, Denza, Yangwang and a new brand that specialises in professional and personal identities. The car brand further said that this milestone-reaching event comes as an important achievement for the development of new energy vehicles worldwide.

The auto company claims to have showcased a massive acceleration in the new energy vehicle industry, facilitating the rapid change of global green mobility.

Speaking about the company’s achievements and new milestones, Wang Chuanfu, Chairman and President of BYD, said that in dealing with the industrial transformation and the ever-changing consumption trends in the future, the automaker will continue to focus on scientific and technological innovation. “In addition to that, BYD will keep on fulfilling people’s pursuit for a better life with leading technologies and diversified products”, said Wang Chuanfu. BYD has already entered the Indian market and currently sells two different all-electric vehicles in the country. While the first BYD product in the Indian market was the e6 electric MPV, the second model came in form of the Atto 3 EV.

The BYD e6 was initially available for enterprise buyers. However, later the carmaker opened the EV sale for personal vehicle buyers as well. The company’s success in its local market is leading to its launching in many international markets with Australia being one of the first to see pure EVs from BYD. The BYD Atto 3 launch has seen thousands of local orders in Australia, reinforcing the need for more affordable EVs in this market. Last month in October, BYD became Australia’s second best-selling EV brand and that lead is only set to continue with EV deliveries only set to ramp.