Can AI be an effective tool of defense ? 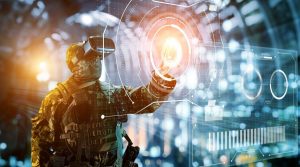 AI has been synonymous with innovation and change for the past few years. Every field that has added artificial intelligence to its job strategy and planning has imperatively reaped rewards. While those that leveraged AI is on the way to carve a monumental place for themselves, even those that are new to the field aren’t robbed off the immense number of opportunities and rewards.

In such a situation, the next question is whether artificial intelligence is intelligent enough to be used as a defense tool. Can the accuracy and efficiency of AI be of help to prevent atrocities created by the inhuman streaks of a few? Can AI transcend from making life better to saving lives?

The answer is still in the neighborhood of partial certainty and speculations, however it is worth a shot. Presumably, in the near future, the efforts put into the research with respect to preventing mass shootings and attacks might bear fruit.

But how does artificial intelligence perform this complex function. A function that requires more than just  accuracy and efficiency in the toolkit. Because attacks don’t come announced and what holds weight is the abrupt and timely response, which is inevitably dependent on the human reflexes. A domain AI is yet to master.

Here, AI works in a different way, along the lines of the saying, ‘Prevention is better than cure. One way of working this out is by detecting potential threats using camera footage. The face recognition feature can also be of great help to map out people who carry threat. For example, by detecting the face of those that are banned from a particular place to due violent or criminal activities in the past, the authorities can be alerted, giving them enough time to get reinforcements. Image recognition also carries the added feature of weapon identification.

For the past few years, organizations have been training artificial intelligence to identify intent in order to facilitate communications with customers. Another example is the sentiment analysis that helps in comprehending emotions through expressions, similar to the one used by Twitter. This can considerably help in taking required action if a person’s intent is detected before the act. This can prove to be an absolute gamechanger when it comes to defense.

Though the scope of AI in defense is immense, it is not without flaws. There will be loop holes through which the intended goal of the device can be surpassed and used for the same purpose that it was designed to prevent. However, that doesn’t mean we must stop trying. Because here, we are dealing with a topic sensitive as life. Artificial intelligence might not reach a point of brilliance where it can prevent all attacks. But if it can make even a small difference, that shouldn’t be overlooked. For, when it comes to saving even one life, the small difference can have a big impact.