Cardano Staking Address Jumps By Over 200,000 In 3 Months

Cardano is an open-source blockchain platform. Decentralized and open-source, proof of stake provides consensus. Ada, its internal coin, can be used for peer-to-peer transactions. Cardano was created by Charles Hoskinson, who also founded Ethereum.

The number of ADA staking wallets has increased to 821,024 as of September 10, according to statistics from Pooltool, a Cardano (ADA) data aggregation tool. Since June 3, the number has risen by 212,633 wallets, from 608,391 addresses in three months. This represents a 34.95 percent increase.

Bitcoin was trading around $46,000 on Friday morning, close to its 200-day moving average of $45,900. Following Tuesday’s flash fall, the world’s largest cryptocurrency has been magnetized around its level for three days.

Cardano recently surpassed Bitcoin as the third-largest cryptocurrency, with a market capitalization of $76.16 billion. The total ADA staked is currently valued at $57.57 billion, accounting for 71.4 percent of ADA’s total supply. The increase in staked wallets appears to be a foreshadowing of the future Alonzo Purple update. The development is likely to deliver more good news to the Cardano network as a whole.

Cardano has lost 18.06 percent of its value in the last seven days. Cardano traded for $7.6378 billion dollars in the twenty-four hours leading up to the time of writing, accounting for 4.44 percent of the total volume of all cryptocurrencies. In the last week, it has traded in a range of $2.0316 to $3.0291.Cardano’s price is currently down 18.07 percent from its all-time high of $3.10, which was recorded on September 2. 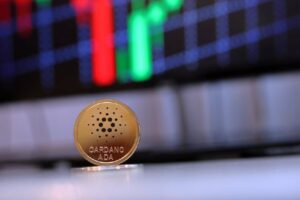 In other Cardano news, on August 22, Google searches for “Buy Cardano” reached a three-month high. ADA, which is currently trading at $2.37, recently touched an all-time high of $2.88. According to a Finbold analysis, Cardano staking has become much more popular as a result of the attention it has received from numerous platforms. mining, Canadian digital finance, and technology investment firm, just added ADA to its list of staking assets. In addition, the company plans to add the asset to its product range in order to attract institutional investors.

According to Wallet Investor, Cardano is a long-term investment that can yield high returns after one year or longer. Every three minutes, the website generates Cardano analysis, and their prediction process is nearly entirely based on artificial intelligence. Wallet Investor has made several Cardano predictions, which are as follows: