Cathie Wood on Tesla being cut from S&P 500 ESG Index: ‘Ridiculous’ The Ark Investment founder said it is 'not worthy of any other response.' 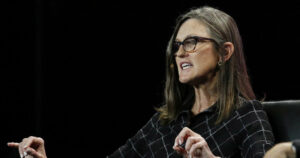 Ark Investment founder Cathie Wood does not appear pleased regarding the latest development around one of her most popular investments, Tesla Inc. She appeared rather unhappy with the EV company being booted out from a significant index tracking socially and eco-friendly companies.

Wood’s curt reaction was “ridiculous” to the news about the S&P 500 ESG Index dropping Tesla Inc. The Index dropped the electric vehicle maker from its lineup, as a part of its yearly rebalancing.

On Tuesday, May 17, Margaret Dorn, senior director and head of ESG indices, North America , at S&P Dow Jones Indices gave a statement in a blog post. She stated that though the EV company might be fulfilling its part in “taking fuel-powered cars off the road,” it has still fallen behind its competitors when tested through a wider ESG lens.

Ridiculous. Not worthy of any other response. https://t.co/zwISYknbKB

Possibly, many may have perceived this announcement from S&P Dow Jones Indices as a shock. This is taking into account that the EV giant is viewed as a pioneer of producing electric vehicles for the masses perhaps laying the groundwork for large manufacturers. These include General Motors Co., and Ford Motor, who are rushing to compete with Musk’s Tesla in electric vehicles on a larger scale. This was following them falling way behind Musk & Co. in the low carbon category.

Dorn went on to lay out the reasons that led to Tesla being excluded, one being a “decline in criteria-level scores.” This was connected to its low-carbon strategy, along with its “codes of business conduct.”

Clearly, Wood has seen Tesla become one of her largest and most successful investments yet. The Chief Executive of Ark Investment, known for her bullishness, has exerted it significantly on disruptive companies such as Tesla. Moreover, this aided in launching her to popularity on Wall Street. However, her flagship fund has been evidently unhinged by this downturn. Which, in turn, has capsized much of the market in tech-related, growth-oriented and technology investments.

Since its peak back in mid-February last year, Wood’s flagship ARK Innovation ETF ARKK, -4.43% has collapsed around 74%. Moreover, it is down more than 56% till now this year. On the other hand, Tesla’s stock has collapsed way more than 42% ever since its last peak in early November last year. Till now in 2022, Tesla’s shares are off 33%. As we know, it had received quite a number of blows since Musk’s announced his Twitter acquisition deal.