On 11 July after a successful mission, Virgin Galactic Founder Richard Galactic carries the Indian American crew member Sirisha Bandla on his shoulders. It became a remarkable picture on the internet as Bandla is the third Indian-American woman to fly to space. 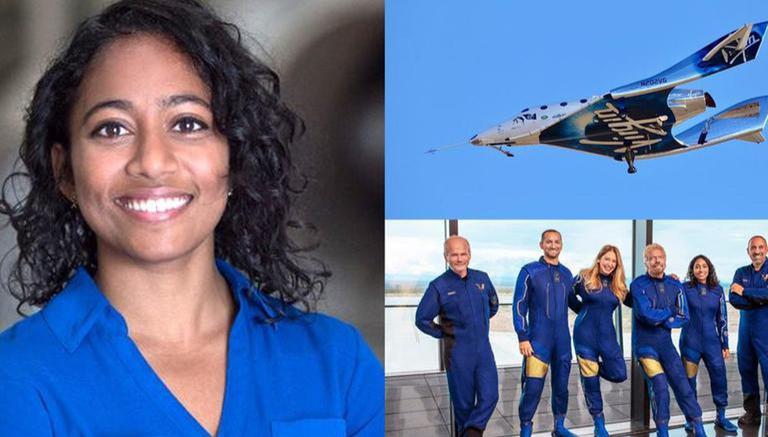 Born in Guntur, Andhra Pradesh, and bought up in Texas, Sirisha Bandla is one among the five crew members of Virgin Galactic’s first mission. She is also the vice president of Virgin Galactic for government relations. After Kalpana Chawla and Sunita Williams, Sirisha Bandla became the third Indian-American woman to go to space. Also, she is the second Indian-born woman, and fourth Indian to travel to space.

Bandla told NBC news, “I am kind of still up there but it’s so glad to be here. I was trying to think about a better word than incredible but that is the only word that can come to my mind Seeing the view of Earth is so life-changing but also the boost the rocket motor kicking in. The whole trip to space and back is just amazing.”

Graduated from Purdue University, she joined Branson in 2004 and joined the founding of Virgin Galactic in 2015. It is a proud moment for India, especially South Indians who are congratulating the Indian-America on being the second India-born woman to go to space. Vice President of India also conveyed his congratulations through Twitter on 11 July prior to the trip.

Glad to know that Sirisha Bandla became the second India-born woman to fly into space. Her achievement will motivate many more young girls in India & abroad to take up challenging careers. Heartiest congratulations to Sirisha Bandla, her parents and mentors! pic.twitter.com/ncGPiH07i9

Once rejected by NASA due to poor eye-sight

Bandla wanted to go to space but was not selected as a pilot or astronaut for NASA missions due to poor eyesight. Now as things turned around for her due to Virgin Galactic, she was assigned to conduct experiments designed by NASA. These experiments involve plants in microgravity.

The point of having spaceflight opportunities for others who dream to go to space is what space tourism is about. Everyone in the crew has their own story of why the mission was important to them.

Furthermore, the mission was a successful one when the Virgin Galactic vessel touched down at 9:40 AM Mountain Time (1540 GMT). As the company announced “sweepstakes” where two people get to win the tickets the reality is kicking in. While Virgin Galactic is already ahead of Jeff Bezos’s Blue Origin, the upcoming events is creating competition. Thus working towards giving spaceflight tickets to common people. Virgin Galactic is the result of 17 years of hard work by Branson. His delight is all seen in the picture we see Bandla on his shoulders.