Coinbase has officially announced Apple Pay support, and it promises Google Pay support will be available soon. iPhone users will be able to buy popular cryptocurrencies like Bitcoin and Ethereum with a Visa or Mastercard debit card linked to Apple Pay starting today. 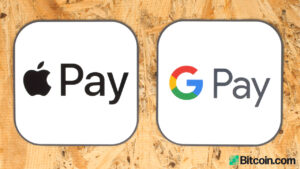 Previously, consumers could only use Apple Pay to purchase bitcoins on Coinbase if they possessed a Coinbase-branded debit card. Due to the widespread use of Visa and Mastercard services in worldwide markets, Coinbase’s expansion of services will now allow the great majority of its clients to purchase cryptocurrency.

Coinbase has announced that Visa and Mastercard payments will be integrated into Google Pay later this year for Android users. Coinbase’s intentions to grow its “global footprint” and enter new markets are bolstered by the integration with payment services. Users can now use funds from a linked PayPal account on Apple Pay, according to Coinbase.

Coinbase announced the integration of Apple and Google services with its Coinbase debit card, which allows users to “pay” with cryptocurrencies by converting their existing assets into USD for purchases.

The Coinbase debit card was introduced in October 2020 and has proven to be popular due to perks such as up to 4% cashback benefits while using the card.

Customers will be able to cash out huge amounts of up to $100,000 quickly via Real-Time Payments (RTP), a payments system designed for fast, same-day transfers between financial institutions, according to Coinbase.

Withdrawals using ACH on Coinbase might previously take up to three days to process. Coinbase claimed to be the “first crypto exchange to offer instant cash-outs via Real-Time Payments (RTP),” and went on to describe the benefits of the withdrawal method, claiming that “RTP lets you get your money in seconds, 24/7, without the high costs of uncapped fees,” and that “there are no limits on the number of times you can cash out per day.”

The exchange is also buying Zabo, a crypto data aggregator that uses an API to connect financial apps and platforms to crypto exchanges, wallets, and protocols. The platform provides an API that connects to users’ crypto accounts on an exchange and maintains asset balances and transaction history.

The platform’s most famous application is for calculating tax payments, which has become a hot topic in the crypto business as a result of the prospect for increased regulation for both exchanges and consumers.

If you find the article informative then do share it with your friends!