A significant measure of the level of entrepreneurial spirit in a country can be gained from the enthusiasm and zeal with which its early stage founders are solving real world problems. BITS Pilani is a university acclaimed for its booming startup culture and BITS alums at the helm of behemoths of the Indian startup ecosystem such as Swiggy, redBus, Groww, and Postman among others are a testament to the entrepreneurial energy of this institute.

At the centre of this energy lies Conquest, a full-fledged startup accelerator inspired by the likes of Y Combinator and Sequoia’s surge. Run entirely by a driven group of 30 students from BITS Pilani motivated by the sole purpose of creating value for startups that come to Conquest. Started in 2004, as a simple B-Plan competition, the ambition of the team behind Conquest continued to grow as they realised they have the potential to make a much deeper impact on the ecosystem- they pivoted first into an entrepreneurship conclave and finally into a startup accelerator in 2018. Just over the last five years Conquest alums have added significant value such as ThinkerBell Labs raising over Rs. 1.05 crores at Shark Tank India, Social Cops which was acclaimed by the Prime Minister in Mann Ki Baat, and Ippopay which was funded by Coinbase Ventures among others.

Even though the number of E-cells in the country has grown exponentially over the past decade, Conquest remains a unique endeavour with far reaching effects on the Indian ecosystem. The students involved inevitably end up becoming towering figures with the founders of GreyOrange – valued at over $500 Mn, Visit Health – an AI driven health diagnostic chatbot, and BiteSpeed – raised $1.9 Mn in seed funding having been a part of the accelerator at the beginning of their careers.

This year’s Conquest Launch Event was an example of the ever growing scale of the program with stalwarts of Indian entrepreneurship sharing novel insights from their journeys. Ritesh Malik, the founder of Innov8 was the keynote speaker this year and spoke about the mental models that early stage teams should follow to maximise their chances of success. Being a flagbearer of innovation himself, he placed special emphasis on the power of compounding and making your product 1% better everyday. Describing his ideal founder he said, “Best founders create opportunities from their own problems. Change is the highest ROI business.” 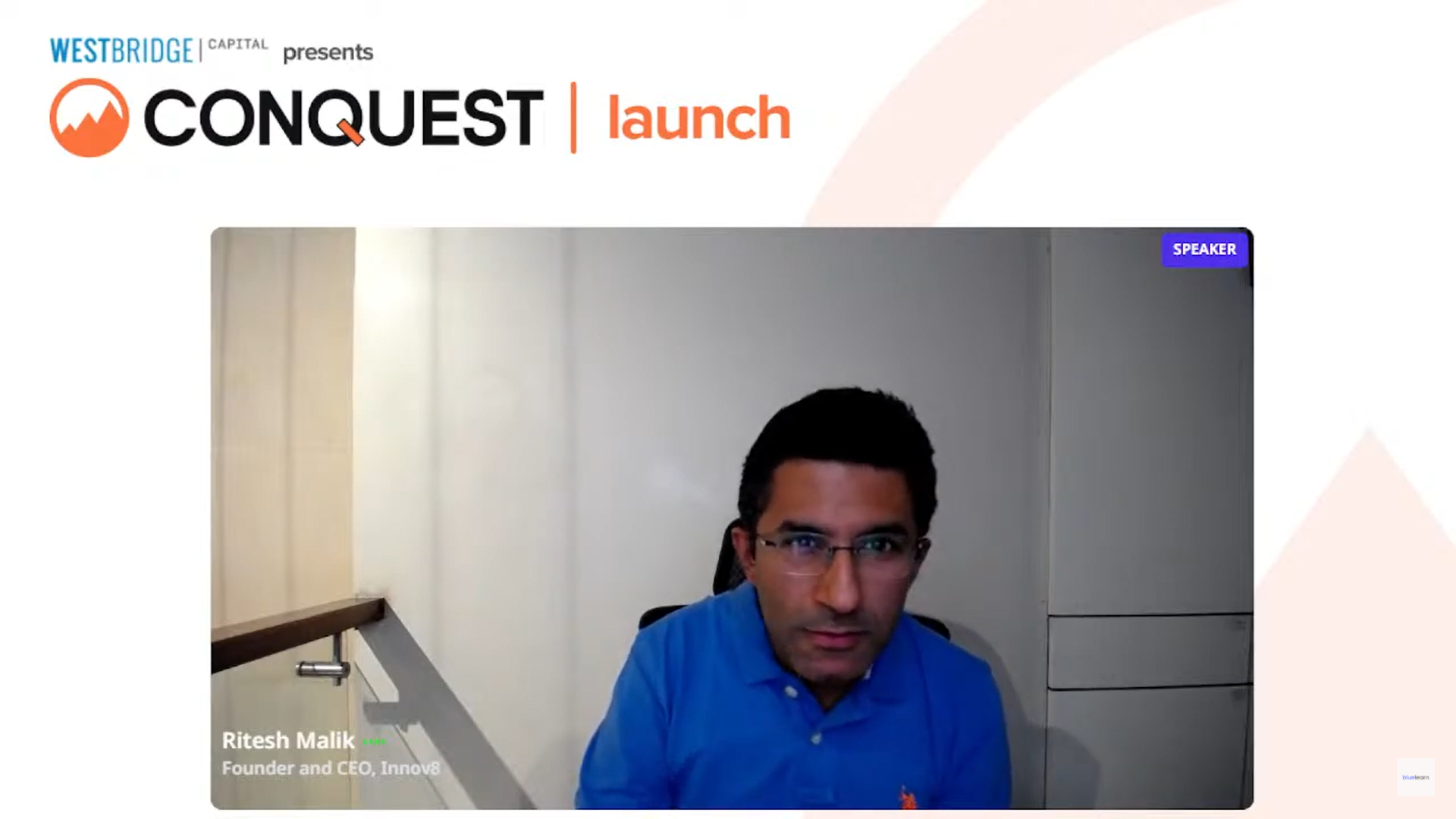 Deepak Ramineedhi from Westbridge Capital as the Guest of Honour explained how with one of the largest consumer internet bases in the world, India is probably one of the best places to startup stating- “This is probably a once in a lifetime opportunity for young people to startup. If you want to start a business you will not find a better geography or time to start tech enabled businesses across sectors.”

With a dynamic team, Conquest aims to continuously reinvent itself to adapt to the ever evolving ecosystem. With its fast expanding community of crypto enthusiasts, Conquest believes that India is poised to be at the centre of the technological revolution this time around. With the vision to fuel this revolution, Conquest has conceptualised a web3 track which will be a program exclusively for startups in the crypto metaverse and DeFi space.

Since this is the inaugural edition for this track, Conquest hosted a panel discussion where thought leaders in these domains including the likes of Sandeep Nailwal, the Co-founder of Polygon, Akshay BD from Tanmay Bhat’s SuperteamDAO, Tanay Pratap, Co-founder and CTO of Invact Metaversity and Vijay Kalangi, the Co-founder of SolRazr got together to have an in depth conversation about bringing web3 to the next billion users. Akshay BD drew parallels about the hype surrounding crypto and web3 with that of social media in the last decade highlighting how even now it is a highly underrated phenomenon since it played a part in electing an American President. Sandeep in particular was highly optimistic about web3 stating “My advice would be with folded hands that even if you don’t understand web3 right now, do not miss this revolution. You might think many of these things are a scam and some of these things are but this is going to be a big part of your life for many years to come. Just keep learning. Keep learning and you’ll have your aha moment”. 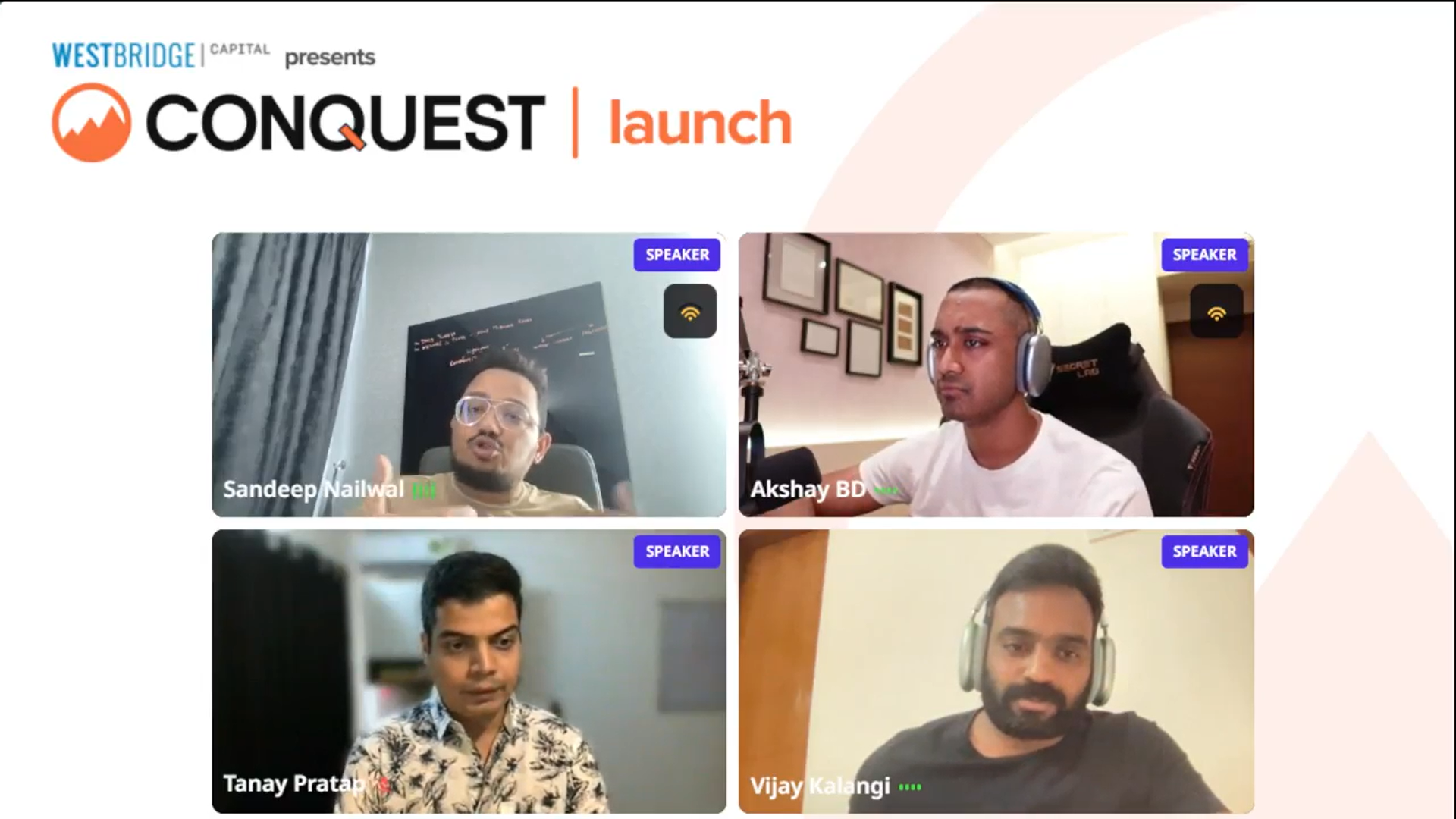 Being an accelerator, Conquest understands the high octane nature of the startup world and how this continuously reshapes its role. To discuss how the accelerator model has been refined over the years and how it continues to be one of the most important programs for early stage ventures, Conquest hosted Arnav Sahu from Y Combinator, Rahul Seth from Antler India and Chintan Bakshi from CIIE. The ideas shared gave a layered understanding of the minds behind these programs.

The ambitions of the Indian startup ecosystem grew so expeditiously that a huge gap of knowledge and capital was created between founders with great ideas and industry leaders with decades of experience and knowledge. Conquest aims to bridge this gap by bringing some of the most promising founders of this generation in close contact with investors, mentors and experts.

Among the 3000+ registered startups, the top 100 startups are selected after careful consideration by a jury of industry experts. They are then provided with startup tool kit that includes valuable resources like SaaS product memberships which help them to further groom and scale themselves.

The top 30 startups then get one-on-one mentoring sessions where they gather insights from some of the accomplished names from different walks of the startup ecosystem. These include the likes of Mahesh Vandi Chalil (Head of Technology, BookMyShow), Arjun Nohwar (Country GM, HBO Max), Anirvan Chowdhury (Investments, Blume Ventures), Zeenal Patel (AVP & Product Design, AJIO.com).

Funneling down further, Conquest provides the top 15 most promising startups with an exhaustive 6-week long online mentorship. Alongside the sector and vertical specific mentorship, we also host competitive pitching sessions and organize AMAs and fireside chats with some of the most prominent names in the industry like Ankur Warikoo from Nearbuy and Awais Ahmed from Pixxel. 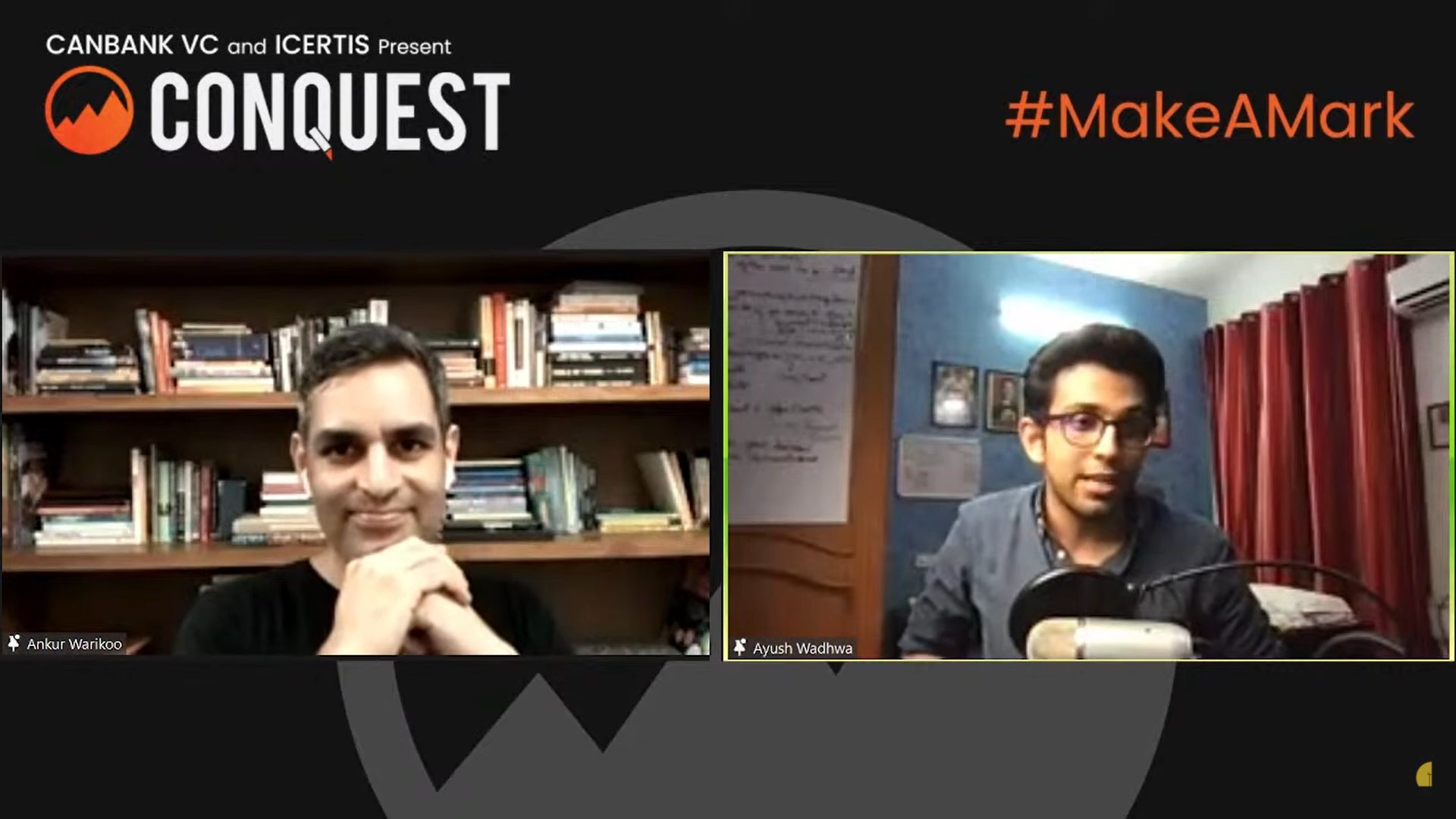 In the Grand Finale, the top 10 startups from these 15 undergo an all-expenses-paid 10-day accelerator program in the country’s tech capital, Bengaluru, where they receive direct mentorship and attend sessions on vital topics like networking and fundraising.

The six weeks of Conquest finally culminate with the Demo Day which is similar to what Shark Tank India made popular through our television sets. It is indeed astonishing to know that Conquest has been hosting this Demo Day where founders pitch their startups to reputed angel investors and a jury for the last five years, long before Shark Tank India came into existence! The Demo Day comprises keynote speeches and panel discussions with big names like Shradha Sharma, Sanjay Nath, and Sanjeev Bikhchandani just to name a few. The winner of Conquest is then granted an equity-less cash prize. Over the last 2 years even in a Covid impacted capital market, Conquest disbursed over 60 lacs to winning startups.

Registrations for the 18th edition of Conquest have now kicked off. To register click here. 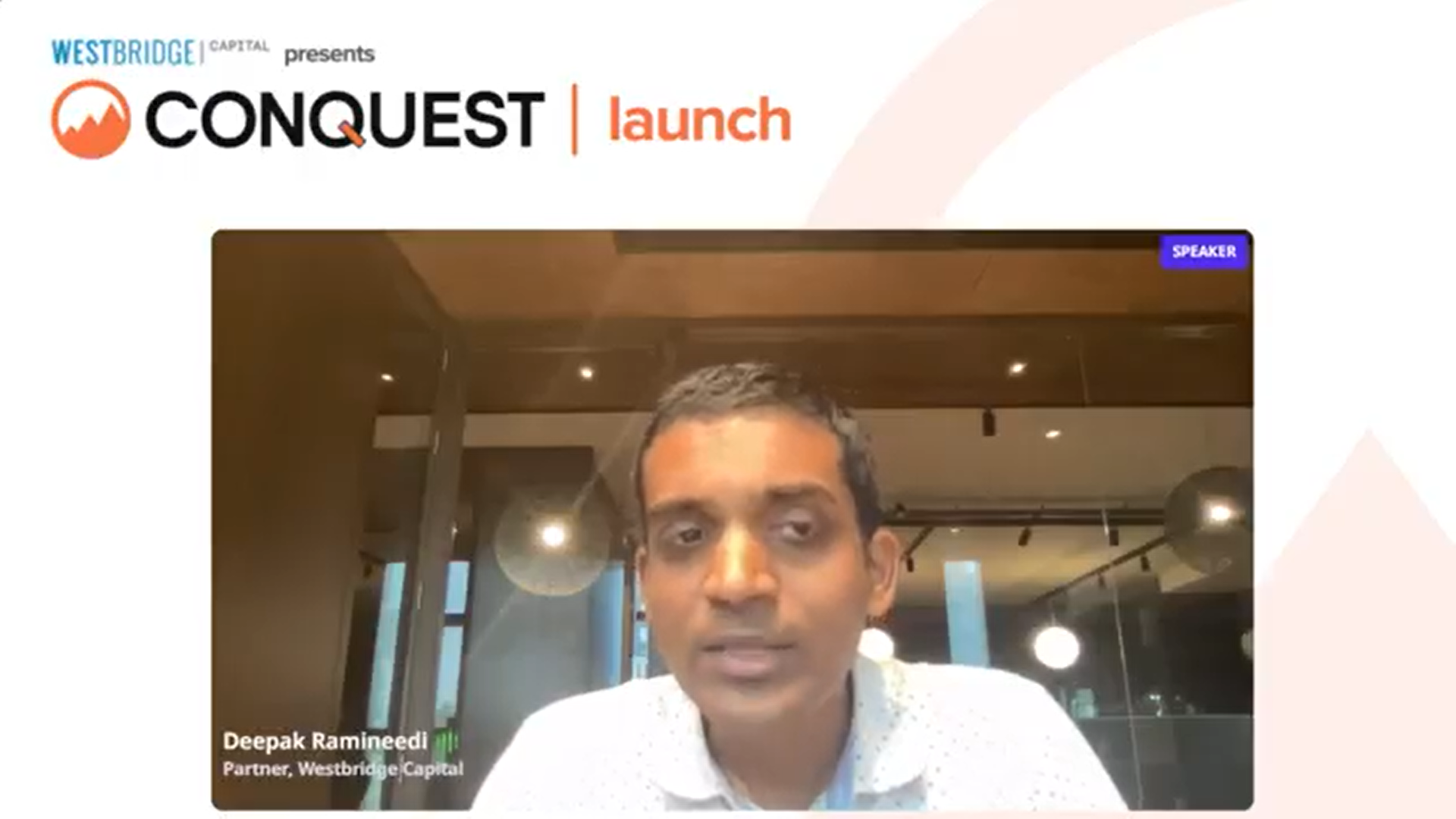