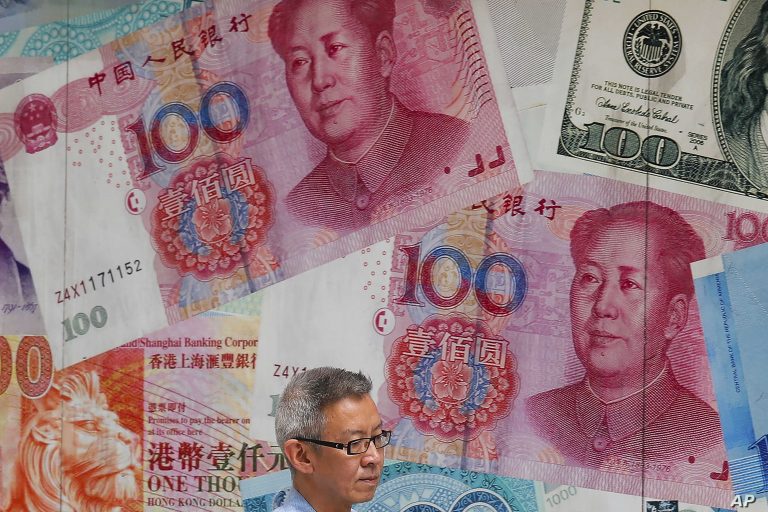 FILE - In this Aug. 6, 2019, file photo, a man walks by a money exchange shop decorated with Chinese yuan banknotes and other countries currency banknotes at Central, a business district in Hong Kong. China allowed its yuan to sink to an 11-year low against the dollar after U.S. President Donald Trump threatened to block American companies from doing business with this country. The yuan declined Monday, Aug. 26, 2019 to 7.1468 to the dollar, its weakest rate since January 2008. (AP Photo/Kin Cheung, File)
Home
Crypto

Bitcoin slides below $40,000 as China banned financial institutions and payment companies from using crypto transactions. China’s attempt to clamp down digital trading marketing is flooding in with various Cryptotrading memes.

With recent tweets from Elon Musk, Cryptotrading already experienced drastic changes. Now, Bitcoin value went down the highest, 15% down. It currently values around $36,250. Meanwhile, traders are expressing their pain through memes. They keep coming in with time. Here are the most popular Cryptotrading memes,

Here is a meme showing how Bitcoin already had changed values with Elon Musk’s tweets. But, the China ban hit harder than before, so much that it is no laughing situation. Earlier it was only a matter of time, as announced by Tesla that they halt their Bitcoin payments till greener solutions are found.

Now things are different as the world’s most populated country bans cryptotrading.

Me looking at my crypto portfolio last week vs me looking now #Altseason2021 #cryptotrading pic.twitter.com/pfUC6rifKC

Also, under this meme, many have expressed their concerns. Most recent investors started out with buying DOGE, as the crypto was as low as 40 cents last week. Below is another meme with similar humor in it.

My Binance portfolio last week vs this week #Bitcoin pic.twitter.com/iFT1ZR9sfO

2. Slam on the brakes

Here is another relatable cryptotrading meme, if China’s ban doesn’t hold you from trading cryptocurrencies, then what will. Though nobody is sure how the future will be, this has put a stop to those who thought they have a future with cryptocurrency trading.

Me opening up my portfolio #cryptotrading pic.twitter.com/4EmF4dSEMA

Various Bitcoin miners who purchased the crypto 3-5 years back saw this as an opportunity to invest more. But, things have come to a halt. Below is another meme on how a crypto trader keeps looking at his portfolio, and the values come as a shock.

me checking my portfolio and seeing BTC and ETH in red #cryptotrading pic.twitter.com/71R7qFYLBw

3. Buy a dip and get dippier

This is to imply on those traders who bought the crypto as it’s low but turns out the new values are even lower. Unexpected turn, which doesn’t show a promising future. Since November 2018, this is the first time Bitcoin hit a monthly decline.

When you buy the dip and it gets dippier. #cryptotrading pic.twitter.com/IMXxrJuGsh

This meme was so accurate and relatable, everyone could just laugh in pain. Below is another meme on ‘dip’ as it becomes a hot takeoff word from the above meme’s replies.

BTC and ETH after I bought the 'dip' 😤 pic.twitter.com/eVNUnDXzk9

The ‘dip’ has another meme, especially for Football fans. It seems ridiculous as the trader is looking out for that crypto that has increased value, but there isn’t one. Who knew he wouldn’t get what he’s looking for?

me buying the dip and watching it dip more #cryptotrading #cryptocurrency pic.twitter.com/8CNbEpnKAN

4. The shock after waking up

It’s been more than 12 hours since the news of China Banning Cryptocurrencies is out. Most traders woke up to such a huge shock as their pocket value has come to a new low. It isn’t just Bitcoin, but every other cryptocurrency went down, meaning it hit every crypto trader.

Most hilarious meme so far, it is an edited video from the series, “The office”. It shows that all cryptocurrencies are screening for help, asking to save them. While investors found themselves in a new low, how worse would it be for Bitcoin farm owners?

As the most population is in China, cryptocurrencies lost their owners on a large scale. Leading to cryptotrading as a questionable choice of trading to earn.

6. Investing is not for me

#cryptotrading
I am made differently. Investing is not for me. pic.twitter.com/ySa270mJYe

Even the oldest crypto trader would have felt the pain as no one would have guessed this.

Joking around with the fact that it has always been the same with cryptotrading, Ivica Milaric shared a meme as “Magic world of Cryptotrading”. With the popularity of the tweet, he tried to sell his book on procrastination.

Irrespective of that, it was a relatable situation for traders, as reported by Statistica, the highest crypto traders were in 2020. There was an increase in 2017 but eventually died down by 2018. The meme couldn’t be more apt.

I'd like to welcome everyone new to the wonderful, magical world of #cryptotrading! pic.twitter.com/HwjkuDLb1H

Every crypto trader had the same thing in mind while investing, “I will earn with cryptotrading”. The first thought after knowing how low the values went is this meme.

9. Everything is on fire

It is a time of uncertainty. Crypto traders can sell their cryptocurrencies, in case the values were to increase in the future. Also, no one is willing to buy new ones. Doing anything would be stepping in danger with every step, as shown in the meme. Especially the DOGE buyers who bought the currency two months ago when it was as low as 40 cents.

As Bitcoin traders have been keeping an eye on Elon Musk’s tweets, they wouldn’t have guessed in their wildest dreams that it would go this low. Often, we see Twitter users replying as “DOGEEE” or “Bitcoin” in replies under Elon Musk’s tweets.

Being patient and having hopes didn’t lead to what the traders wanted. This meme consoles those traders who had high hopes and don’t anymore.

Ever wished you woke up from this horrible dream? Cryptotrading downfall led many crypto traders to feel the same. “Maybe this will all disappear if I go back to sleep and wake up later.”

Crypto traders last month were those who carefully talked with fellow traders and bought the currency. It was considered as a valuable investment, if not now, maybe later the value of DOGE or Bitcoin will increase a lot more. Since 2020, the demand came into the limelight and companies have started considering taking payments in cryptocurrencies. What happened now?

This meme shows how people should have stayed rich without buying the cryptocurrency, instead of buying and becoming poor.

Crypto investors in APRIL vs MAY #Bitcoin #cryptocurrency #cryptotrading pic.twitter.com/Wmz4OFjffb

This is also a similar situation with last week and this week’s traders. Before investing it seemed real, felt rich. But the final blow hit hard.

My btc and eth portfolios last week vs today pic.twitter.com/vZyr64npo3