The rise of Dogecoin on Tuesday resisted more market downturn ahead of a major Federal Reserve meeting and increased regulatory concerns. On Tuesday morning, Tesla CEO Elon Musk promoted Doge, tweeting, “Tesla will make some items buyable with Doge & see how it goes.”

Dogecoin soars as the crypto market 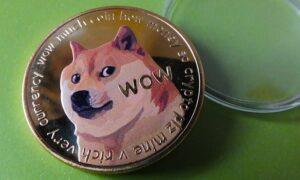 The stock market is jittery ahead of a major Federal Reserve meeting that ends on Wednesday. In December, the Fed is likely to cut its purchases of Treasuries and mortgage-backed securities by $30 billion, more than doubling it’s November cut of $15 billion.

This would drain liquidity from the market at a faster rate, potentially stopping asset purchases as early as March 2022. After that, the Fed is forecast to begin raising rates in June 2022, with three raises the following year.

Investors will pay close attention to the Fed’s tone to see if it signals a gradual tightening of monetary policy. Inflationary pressures are fueling fears that the Fed would adopt a more hawkish tone or policy. Stocks fell on Tuesday as a result of the worries, putting pressure on other risk assets such as cryptocurrency.

Of course, when the Fed taps the brakes, there will be less virtual money to invest in imaginary assets—assuming that most cryptos have little inherent value and are mostly utilized for speculation.

Meanwhile, a Senate Banking Committee meeting in Washington focused on stablecoins. Stablecoins are cryptocurrencies with a constant $1 value that are backed 1 to 1 by cash or other liquid assets.

Democrats and Republicans interrogated business supporters and investor advocates on a partisan basis, with both parties appearing to be far apart on a regulatory compromise.

Brown compared the rise of cryptos to the stock market catastrophe of 1929 and the subprime mortgage and derivatives crisis that rocked financial markets in 2008.

He continued, “Stablecoins provide a link between the actual economy and the “fantasy” economy,” underlining the Biden administration’s support for stronger regulation.

Senator Elizabeth Warren claims that crypto coins are “propping up one of the shadiest aspects of the crypto industry.” She says that regulators must “get serious about clamping down” on these hazards before it is too late. Stablecoins, according to Republicans, may lower transaction fees and promote financial inclusion.

Sen. Pat Toomey believes that coin-making regulations should be “narrowly crafted and designed to not harm” (R., Pa.). He believes that asset and redemption policy disclosures should be transparent, that audits should be necessary, and that financial monitoring standards should be upgraded.

Dogecoin has long been a favorite of Musk. He’s put money into it, bought it for his child, and even talked to the developers about upgrading it to handle more traffic. When he was voted Time Magazine’s Man of the year, he commented, “Fundamentally, Bitcoin is not a good substitute for transactional cash.” Instead, he recommended Dogecoin, even though it was developed as a joke.