DrivoJoy Acquires Funding Of $600K From IAN And Others 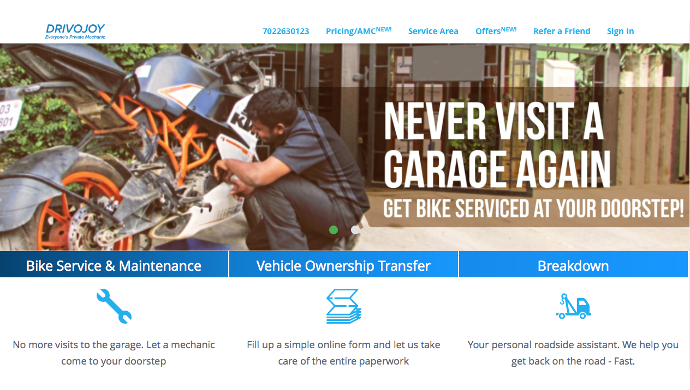 23 March, 2016, Bangalore: DrivoJoy, Bangalore based bike and scooter repair firm has closed its recent round of funding by raising a capital of US $600K. The amount was raised from Indian Angel  Network and others in its pre series A round.

Since its inception in 2014, the company has focused on providing its services to the customers’ doorstep. Founded by Aman Singhal, Ravindra A and Vishwanath Kollapudi, DrivoJoy aims to bring revolution in the two-wheeler servicing and repairing segment. The company claims that every month, it renders its services to almost 400 customers and has been witnessing a monthly growth of 30 per cent. DrivoJoy also proclaims that till now, it has served around 2000 customers.

Commenting on the raised funding, Aman Singhal, co-founder of DrivoJoy said, “We hope to transform the way 2-wheelers get serviced by radically connecting customers and mechanics directly. By eliminating the middle layer, we empower mechanics for a sustainable living where they earn 2-3 times as much as they used to earn being employed at a garage.”

DrivoJoy plans to utilise the raised amount for hiring new talent, speeding up its marketing and enhancing its technology. However, in future it will be also entering into other verticals of automotive sector.