Dubai’s Roads and Transport Authority launched public electric buses that can be charged while parked. At stations, the charging facility for busses will be made available. For now, Dubai is testing by launching two electric buses. 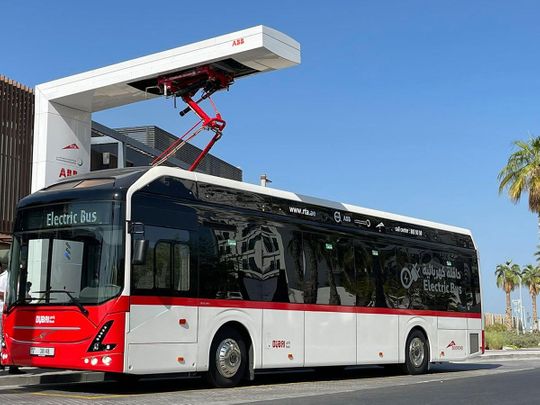 These two busses will be Volvo 7900 electric busses. They will be settling on a specific path in both directions from La Mer South to Al Sufouh Tram Station by passing through King Salman bin Abdul Aziz Street. The launch of the vehicles will be coordinated by Dubai Electricity and Water Authority(DEWA).  Also, Volvo Bus company, ABB Group, and Real Estate will be part of the launching event.

Further details about the busses include 200km capacity batteries when fully charged. The range could vary depending on the location slope and other details like operation activities. Each bus has 38 seats and these seats are all foldable. There is also an interactive display screen for users to use while traveling.

This trial period is expected to continue till March next year. By then the operational efficiency will be evaluated from charging to the trip efficiency. Both the charging points will be evaluated. RTA will make sure the drivers of the busses know how to use them and drive as required. This is also the first time drivers get to experience such a unique system. The train controllers will be monitoring the bus and also the charging unit. Mattar Mohammed Al Tayer, Director-General, Chairman of the board of Executive Directors, RTA said that this test is part of their initiatives towards sustainability and eco-friendly vehicles.

He added, “This particularly fits with the spread of green charging stations of DEWA, which now exceed 300 stations offering 530 charging points across Dubai,” Further adds, “Volvo Electric buses will enhance traveling experience not only for passengers but also drivers and other road users, making cities more attractive for their inhabitants. This trial is a strong step forward towards achieving Dubai’s goal of being the world’s happiest city.”