El Salvador’s ambassador to the United States has said unequivocally that the country is unaffected by international organizations’ attitudes. El Salvador’s decision to utilize Bitcoin as legal cash has been opposed by the IMF and other organizations.

“The U.S. only cares about losing power,” El Salvador’s ambassador to the US said 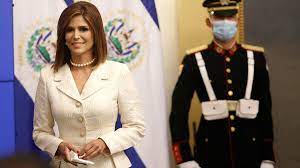 El Salvador’s ambassador to the United States, Milena Mayorga, told that the country is not scared to break bridges with past partners to move forward with Bitcoin acceptance. The envoy went into great detail on the current events that had occurred since the country crossed the Rubicon.

“The concern in Washington DC is about losing the power of the dollar and we can understand that,” said Mayorga. “But Salvador has to move on and be on a different level.”

The envoy stated that Bitcoin provides the country with an alternate funding option to established aid groups such as the IMF. “They’re scared and worried because if we succeed, a lot of other countries will want to follow our path,” she explained.

She believes that Bitcoin will assist President Bukele’s administration in providing Salvadorans with numerous options and a stable economy, noting that the country has suffered from corrupt leadership that “didn’t do intelligently” due to a blatant lack of transparency in the last 30 years.

The IMF had expressed reservations about the country’s acceptance of Bitcoin before its deployment, claiming that the asset’s volatility could be harmful to the economy. The Fund expressed concern over the levels of investor protection in the Chivo wallet in a recent concluding statement but added that the economy has recovered since the outbreak.

Mayorga used the opportunity of the interview to highlight the country’s progress since Bitcoin became legal tender. She said that financial inclusion has virtually been achieved, citing the use of the Chivo wallet by more than an 80percent of inhabitants. Chivo has grown to become the country’s biggest remittance platform in just two months, processing over $32 million in free remittances from the United States alone.

The ambassador emphasized the tourism industry’s expansion as well as the simplicity with which individuals may pay for goods and services using Bitcoin. In October, the government handed $30 worth of BTC to each person to encourage the adoption of the Chivo wallet, as well as $0.20 per gallon fuel subsidies to wallet users.

El Salvador has gone on a buying frenzy, adding 100 BTC to its balance sheet as part of a buy-and-hold policy. Since then, President Bukele has said that Bitcoin profits will be used to build schools and a world-class veterinary clinic.