Elon Musk invokes rapper Eminem in opposing SEC decree As Musk's conflict with the securities regulator goes on, he compares himself to Eminem. 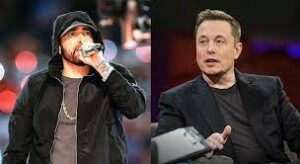 Additionally, Musk renewed his efforts to reverse a subpoena in a federal court filing in Manhattan, previously. This subpoena from the Securities and Exchange Commission of the US demanded details on whether Tesla and its CEO are complying with disclosure requirements under the 2018 consent decree.

The 2018 agreement returned to the limelight after the commission started investigating a tweet from the billionaire on November 6, 2021. In it, he enquired from his followers if he should sell 10% his stake at the EV company, in order to cover tax bills on stock options. Since then, he has sold around $16.4 billion of his shares in Tesla. In the filing from Tuesday, March 29, Musk indicated how requiring lawyers of his company to evaluate some of his tweet was a First Amendment violation. He pointed out how this screening was clearly an unconstitutional prior moderation of his expression.

These lyrics from the rapper are in reference to the Federal Communications Commissions, for they had fined radio stations for playing one of his songs. Eminem’s song “The Real Slim Shady” appeared inappropriate for the commission and they deemed the content offensive. Musk, on the other hand, mentioned how SEC’s subpoena was issued in bad faith. This is for they could not pursue a “fishing expedition” in order to harass the CEO. SEC declined any requests for them to comment on the situation.

The current filing states that Musk was not unaffected by the investigation on his tweets connect to Tesla, It also mentioned how he should be not be simply excused from the agreement from 2018 just for finding it more inconvenient “than he had hoped.” The original agreement rose from a tweet on August 7, 2018. It mentioned how Musk had “funding secured” to potentially take his EV company private. The Tesla CEO claimed his tweet to be true on Tuesday, March 29.

US District Judge Alison Nathan is overseeing this ongoing case. Last week, she won the approval from the US Senate to step in as a federal appellate judge. Moreover, she is still permitted to continue looking over her existing cases.