Education is not a privilege but a right of every child. Each child dreams of achieving something when they are all grown up and education facilitates them to pave the way. Providing a child with education will lead to empowering that child for life. With education as its tool, information and knowledge can be presented to a child. One such person facilitating education in Ghana is Mr Charles Ofori Antipem.

Mr Charles Ofori Antipem has also won season 5 of the MTN Heroes of Change award. He was also the youngest person to win this award since its inception. Mr Charles Ofori Antipem says that, “Being nominated among such heroes was an honour, and my team and I were excited about it. Earlier at the show, Ms Loiusa Enyonam Ansah emerged winner in the education category which I was part of and I never thought I would be the ultimate winner.” 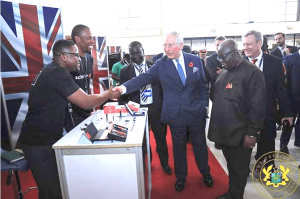 Mr Charles Ofori Antipem’s main goal behind this invention was to redefine the ways of practical science and to provide the students with an opportunity to try and experience the experiments which were published in the books. He was inspired by his late father Mr Solomon Antipem who was a Science teacher by profession.

As a child Charles would frequently witness his father’s struggles to put materials together in order to explain a scientific phenomenon to the students. When Charles’ University friends visited his home town during the vacation to teach the children there, they realised that there was a huge gap between theoretical knowledge and practical knowledge.

According to Mr Charles Ofori Antipem, “Together with Michael, we would save some money to buy some science tools and do practical with the students. Later, we realised that was not sustainable so we came up with the idea of creating something they can use even in our absence and that is how the science set idea was birthed.”

For the company’s future endeavors Mr Charles Ofori Antipem is hopeful with the GH 100,000 cash prize that he has won at the Season 5 of the MTN Heroes for Change awards. This will help them to increase the production capacity and can get millions of school children across Ghana access to these sets.

The invention has also won many other awards including the Most Innovative Education Solution in Africa, 2018, at the African Union Commission for Human Recourse Development Science and Technology; Africa Engineering Innovation Prize, 2018 by the Royal Academy of Engineering and the Scalable Young Social Enterprise Award, 2018 at  the World Export Development Forum, organised by the  International Trade Centre.