Check Out Enytime For A Desired Check-In Time !

An early morning adventure, an important last minute meeting, a room to crash after party or to freshen up before a wedding, find a room with Enytime. Enytime is a real-time on-demand market place, where consumers can book for the hours that they need with the listed hotel room for without paying for the whole night. This concept of providing hotel room to guests on hourly basis is also called as micro-stay. Enytime does not sell hourly rates instead, it works with hotels to allows guests to book rooms in block of  6, 12 or 24 hour periods, as well as selecting their own check-in times.

The disruption in the key service sectors, where brands like Uber are breaking the stigma of fixed price services and platform like Airbnb which are unlocking the value of idle assets instilled the idea and  served as the real inspiration to build Enytime which will unlock the value of idle and perishable assets (in this case idle rooms) by creating a new segment of customers.

Conceptualized and incorporated in July 2015, Enytime’s platform was launched in May 2016. They have 20 bookings as of today and currently have hotels in Hyderabad and are planning to expand to 5 other key cities in next few months. They have massive plans of expansions of  spreading operations in all major cities in India.

ThinkSmart’s SmartCheckin App – Checkin Into Your Hotel Through An App ![/box]

Vinodh Varadati- He is a successful business development professional with 15+ years in leading IT and also an entrepreneur. He co-founded “SKYLA” and now “Enytime”.

Sekar Sandhu-  He is founder of enytime and co-founded SKYLA. He also worked at IBM, SIEMENS PLM SOFTWARE. He graduated from Osmania University.

Kishore Balakrishna– He worked with CA Technologies & Ciber.inc before founding enytime. He graduated from osmania university.

Indian hotel industry is growing at 1.2X year on year and online travel bookings segment is growing at 2.5X and this is going to be significant with 11.2B $ market opportunity in next 5 years and other side there 100 million room nights unsold annually of idle, so Enytime see increasing number of operators adopting the concept of micro-stays to meet modern travellers while maximizing occupancy and monetising on idle rooms.   Platforms like enytime, day stay, hotelsbyday are providing service where in users can book hotel room for smaller duration and pay only for those hours.

As per recently published research data, annually 100 million+ travellers in India bash into airports, coffee shops, friends &  family homes for non-availability of rooms and a reliable platform to book a short stay.Enytime is  targeting all online hotel booking travellers.

Enytime is the first to market real-time on-demand market place to book hotel room by hour.This is a democratic platform where in hotels have an opportunity to list, manage and offer hotel room by hours to consumers directly, there is no scope of price cannibalisation unlike many other aggregation platforms. The real-time interactions which happen on the platform between consumer and listed hotel partner is the fundamental value creation and over a period create strong entry barriers.

Enytime is trying to address those segment of customers who are currently not able to book hotel room for short duration stay with listed hotels ready to offer their idle rooms to maximise their revenues. So essentially enytime matches demand and supply in real-time with super-efficient pricing. 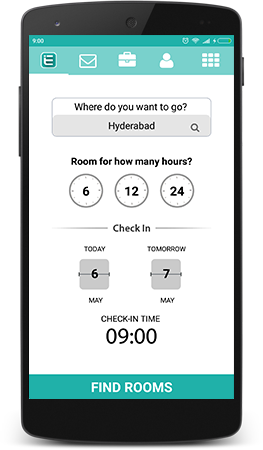 Micro-stays concept is a good way for hoteliers to boost revenues as hotels can increase room inventories by selling one room, twice a day. For hotels, the appeal of enytime is in incremental revenue and they feel micro-stays are a win-win for both the hotel and customer. During the day and between check-in there is often a six to 12 hours period where rooms are empty and that can be monetised. Business travellers tend to check-out before 10:00am in the morning, and check-in for the next guest is not until later in the afternoon. It is an opportunity for guests to try out best hotels in each city, as we focus on mainly 5, 4 and 3-star hotel category.

Enytime is also working on raising investments, team building and  in expansion in more cities.

How Can Frequent Travelers Keep their Wallet Happy?[/box]