Erik Finman’s Freedom Phone Receives The Skeptical Eye And A Truckload Of Memes. 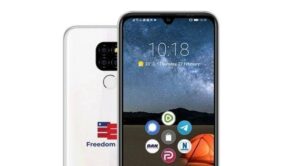 Twitter has yet another trending topic on the line to kick-start hilarious discussions. This time, it is Eric Finman’s Freedom Phone that has been getting a good number of free laughs and memes from around the world. For the uninformed(who will be quite a lot in number), Eric Finman is a young man who was marvelously confident enough to self-proclaim himself as the “youngest bitcoin millionaire.” The idea of the Freedom phone wouldn’t sound too ridiculous coming from him. And if the claims are to be believed, although they are quite hard to believe, Finman’s ambitious Freedom Phone will revolutionize the way people use their phones.

This is the first major pushback on the Big Tech companies that attacked us – for just thinking different.

Complete with it's own Uncensorable App Store & Privacy Features.

Finman revealed this wonderfully questionable product on Wednesday through his Twitter account. He claims it to be the world’s first and perhaps only “uncensorable phone.” The Freedom Phone as the name suggests is particularly aimed to give voice and freedom to those who have been denied the same. The main targets or potential customers are the US conservatives who are of the opinion that their freedom is being hindered by the tech firms. If you think this is a mere joke, it is quite the normal response and you have all the freedom to react that way. However, seems like Finman is serious and it is not his heightened sense of humor on display. Because well-known US conservative, Candace Owens has acknowledged the phone and has even offered a ten percent discount to her followers.

And I’m a proud partner of this amazing product.
Use code: CANDACE and you’ll get 10% off your new phone!! #FREEDOMPHONE

The responses to the Freedom Phone ranged from highly skeptical to rolling on the floor laughing. Because nobody could stomach the idea of this “uncensorable” phone with an app store of its own that contains even the apps that are banned in places. And quite naturally, the next response was a truckload of memes. Looks like Twitterati isn’t very intrigued by the prospect of Freedom Phone. But it is very much interested in the freedom to create memes and it is well reflected on the social media platform following Finman’s announcement. Here are a few memes from Twitter in response to the Freedom Phone. We do not know about the actual potential of the phone, but it sure has a lot of meme potential.

At least it managed to give a good laugh.

So you're telling me a "Freedom Phone" is basically a generic Android Device, with Parler, Telegram, Rumble, OAN, Newsroom, Duck Duck Go and a VPN preloaded?
Wow. A new sucker is born every day pic.twitter.com/7dba81Kknl

And some hard facts.

Guys, I'm not saying you need to check out the "Freedom Phone" trending topic, but if you wanna see a group of the worst people on the internet walking straight through a door marked "absolute scam", you now know where to look.

Drug dealers reading that warrant from the police after realizing the Freedom Phone isn't that private after all. pic.twitter.com/JyUk8aTiMw

The Freedom Phone demographic seems to be the same people who post "FACEBOOK DOES NOT HAVE MY PERMISSION TO USE MY PHOTOS" to their timeline. pic.twitter.com/u0TuObXvbF

It indeed has some high-level tech as you can see.

Just got my Freedom Phone. Thanks Erik!! No Big Tech censorship here! pic.twitter.com/Xw1WXk8Ckd

Apparently, it comes with its very own delivery vehicle. Customized and designed to fit the description.

Pick up your freedom phone from one of the many Freedom Delivery Vans pic.twitter.com/SUh4xP0yzh

Freedom Phone users when they find out their info gets collected and sold by the apps they download because there are no TOS preventing that pic.twitter.com/fSxfSztKsi

Not just a customized delivery vehicle, it even has a meme specially created for it.

This gif was made for Freedom Phone. pic.twitter.com/QXY7ylovFp