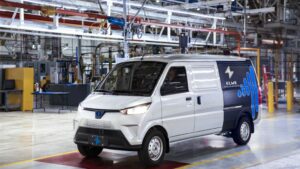 On Sunday, June 12, Electric Last Mile Solutions, the US Commercial electric vehicle stated that it is set to file for Chapter 7 bankruptcy. Reportedly, this was following  a review of all of its products and commercialisation plans. Evidently, this step comes just following the Troy, company based in Michigan disclosing a probe by the SEC- US Securities and Exchange Commission, going on to withdraw all its previously issued business outlook about three months ago.

In March, ELMS revealed in a regulatory filing that SEC was conducting an investigation on matters discussed in a previous filing. This included disagreements with an accounting firm, along with compliance with the listing rules of Nasdaq. The EV maker went public about a year ago by the means of a merger with Forum Merger III Corp, a blank- check firm.

In February this year, Jim Taylor, the then Chief Executive Officer resigned along with its Chairman and founder Jason Luo. This was after an investigation was conducted on their share purchases. Investigations reportedly revealed that Taylor and Luo bought equity at substantial discounts to market value, that too without gaining an independent valuation.

At the time, a former chief of staff at the consumer electronics divisions of Google, and then ELSM’s board member, Shauna McIntyre was appointed as interim CEO. Along with it, former Intel chief, Brian Krzanich was appointed as the non-executive chairman.

“…made it extremely challenging to secure a new auditor and attract additional funding,”

Electric Last Mile Solutions gave in a statement this Sunday on June 12, regarding its situation. It specified how the ‘compound effect’ of the situation clearly made it increasing difficult to ‘secure a new auditor’ and get hold of additional funding. Moreover, the pending SEC investigation which started this year added to the challenges.

Previously, the EV company went on to lay off around 24% of its staff owing to its focus on its core business, aiming to become leaner. Apparently, The approval for the termination plan of 50 employees came on February 21 this year. ELMS was reportedly struggling with its production owing to supply chain challenges following the resignation of Luo and Taylor. Since then, the Troy’s stock had visibly tumbled down about 68%.

The Michigan-based EV maker stated that its decision to file for Chapter 7 bankruptcy protection would enable it to liquidate its assets. This was following them conducting a “comprehensive review of the company’s products and commercialisation plans” which did not give stakeholders a better choice.