Fed bans officials from stock and crypto trades after series of scandals. Basically the Federal Open Market Committee, or FOMC, has established regulations prohibiting senior Federal Reserve officials from buying or holding cryptocurrencies or other investments. 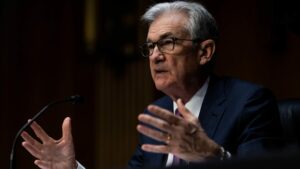 The FOMC announced on Friday that senior Federal Reserve officials who have already joined the organization will have one year to “dispose of all unlawful holdings,” while new employees will have six months. Fed senior officials, including Reserve Bank first vice presidents and research directors, FOMC staff officers, the System Open Market Account manager and deputy manager, Board division directors who regularly attend Committee meetings, individuals designated by the Fed chair, and their spouses and children under the age of 18 are all exempt from the new rules.

Starting on July 1, the rules will allow for the purchase and sale of securities with 45 days’ notice, prior approval, and a commitment to keep the investment for at least one year. Officials are also barred from making purchases or selling during “periods of heightened financial market stress.” Presidents of the Federal Reserve Banks will have 30 days to declare securities transactions, which will be made “immediately” available to the public on their respective Fed websites.

“After further evaluation and analysis, the Federal Reserve expects that additional staff will be subject to all or parts of these guidelines,” the release stated.

The change in rules, which was initially announced in October 2021, was meant to “promote public confidence in the Committee’s impartiality and integrity by guarding against even the appearance of any conflict of interest,” according to the FOMC. The Federal Reserve Board will also decide on incorporating the modifications into Reserve Bank standards of conduct.

Many members of Congress in the United States have called for legislation prohibiting them from owning or trading stocks, citing similar concerns. Senators are allowed to purchase and sell stocks and other investments while in office under the 2012 Stop Trading on Congressional Knowledge Act, or STOCK Act, but they must declare their actions or face financial penalties.

If you find this article informative thendo not forget to share it with your friends and family!