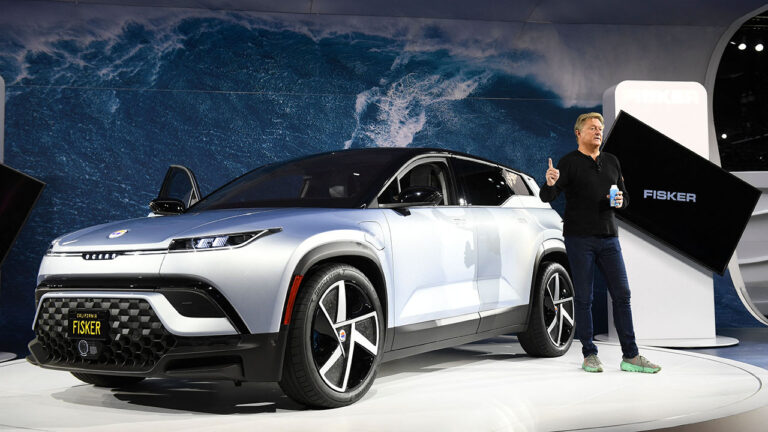 Henrik Fisker speaks about the Fisker Ocean electric vehicle after it is unveiled during AutoMobility LA ahead of the Los Angeles Auto Show on November 17, 2021 in Los Angeles, California. (Photo by Patrick T. FALLON / AFP) (Photo by PATRICK T. FALLON/AFP via Getty Images)
Home
Tech
Automobiles

Fisker, an electric car startup, debuted the production version of its first EV, the Fisker Ocean SUV, at the 2021 Los Angeles Auto Show. In terms of design, it appears to be very similar to the company’s initial prototype, which was presented at CES 2020.

The Ocean SUVs’ interiors will be constructed entirely of recycled materials and will be manufactured using sustainable materials. It also includes a solar roof, which can absorb enough energy from the sun to power up to 1,500 miles of driving every year, as the business previously stated.

A gigantic 17.1-inch touchscreen infotainment display is mounted vertically by default, but with the push of a button, the screen rotates horizontally and enters “Hollywood Mode,” according to the firm.

The Fisker Ocean SUV, which the firm describes as “dynamic and driver-centric,” will be available in three trim levels that span a wide price and range range.

The Sport version will be the most affordable of the three, with prices starting at $37,499 for the base model. It will feature 275 horsepower delivered to the front wheels and will provide 250 miles of range as the Ocean’s entry level model.

The Ultra variant, which starts at $50,000 and has 540 horsepower and a range of 340 miles, is the second model. Extreme is the top-of-the-line vehicle, with 550 horsepower and 350 miles of range. Customers should be able to acquire the autos by the end of next year.

All three variants of the Ocean SUV, according to Fisker, will be able to charge other electric cars or an owner’s home, as part of the company’s greater objective of encouraging renewable energy.

Automakers and battery makers are racing to increase output and create better electric-vehicle batteries, which are critical components of EVs whose demand is predicted to rise in the coming years.

Fisker’s two higher-end Ocean models will use nickel-based battery technology, while the most affordable model will use iron-based technology. The base Ocean Sport model will cost $37,499 and have a driving range of 250 miles per charge, according to Fisker.