Former Google CEO Eric Schmidt has joined Chainlink Labs, a smart-contract oracle service provider, as a strategic advisor. Schmidt’s mission will be to assist Chainlink in the creation of “a world guided by truth.” 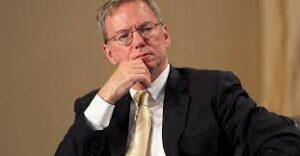 In a statement released on Tuesday, Chainlink announced the hiring of the former Google CEO. The team is working on aggregating and applying real-world data into smart contracts that may be used on a variety of blockchains. Oracle networks, which connect web 3.0 systems with older databases, are used to do this.

Chainlink has assisted in the locking of approximately $80 billion in total value across numerous smart-contract chains.“Blockchain networks and Chainlink oracles are at a crucial inflection point in terms of growth and adoption,” said Chainlink co-founder Sergey Nazarov.

Eric Schmidt oversaw the development of Gmail, Google Maps, Chrome, Adsense, and Fiber while helping Google scale its infrastructure, including a $23 billion IPO. He also served on the National Security Commission on Artificial Intelligence and the Department of Defense’s innovation board. He is now the chairman of the Broad Institute of MIT and Harvard, as well as the co-founder of Schmidt Futures.

Schmidt feels that one of blockchain’s major flaws is its lack of physical connectivity, which Chainlink addresses: “Chainlink is a secret ingredient to unleashing the promise of smart contract platforms and revolutionizing business and society.” I’m thrilled to be a part of the Chainlink Labs team as they work to create a world powered by truth.”

The Associated Press just announced that it will host a Chainlink node, which will give smart contract developers verified data from a trusted source. Schmidt was Google’s CEO from 2001 to 2011, during which time the firm went public, introduced Gmail, Google Maps, and Chrome, and acquired YouTube and Android.

“The introduction of blockchains and smart contracts has demonstrated tremendous potential for the development of new business models,” Schmidt said. “However, it has become clear that one of blockchain’s greatest advantages – its lack of connection to the outside world – is also its greatest challenge. I’m thrilled to be a part of the Chainlink Labs team as they work to create a world powered by truth.”