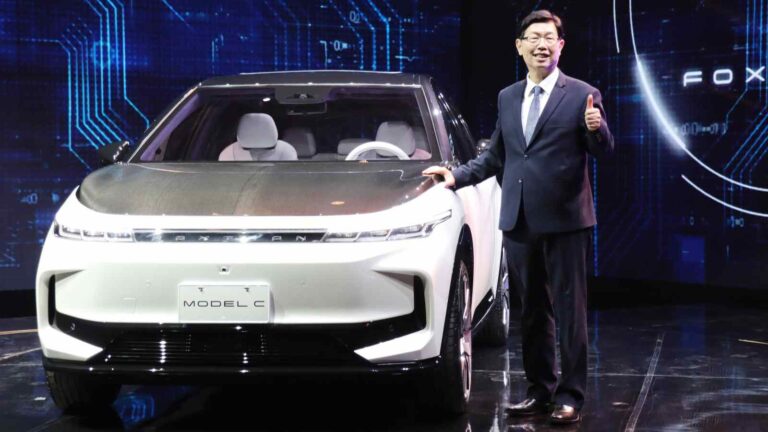 Foxconn plans to manufacture electric vehicles in India by 2024

Foxconn, according to Liu, is willing to manufacture electric vehicles in countries such as India, Brazil, and other European countries. However, he stated that due to ‘disclosure restrictions,’ a proposed action for Foxconn’s coming to India or Brazil cannot be released at this time. Liu added, “Europe will be a bit faster, I agree with that. But as to where I can’t tell you.” He also stated that Foxconn is willing to work ‘indirectly’ with German automakers.

Foxconn, the world’s largest iPhone assembler, made the very first foray into the electric vehicle industry on Monday, showing three prototype vehicles that are powered by batteries. These include the Model C SUV and the Model E sedan, both of which have remarkable features such as race-car-level acceleration and a range of 750 kilometers. The company also showcased a Model T bus, which claims a range of 400 kilometers on a single charge and a top speed of 120 kilometers per hour.

In addition, the company stated that it seeks to build for automobile customers instead of selling directly to customers under its own brand. “We are no longer the new kid in town. We have gradually built an EV supply chain and showcased our EV hardware,” said Young Liu, Chairman of Foxconn’s flagship unit Hon Hai Precision Industry Co.

The company has previously signed contracts with the US-based startup Fisker, which also manufactures electric vehicles, and Thailand’s energy group PTT PCL. In addition, the corporation acquired a manufacturing facility in the United States that was previously owned by Tesla’s rival Lordstown Motors in order to manufacture electric vehicles. In August, it bought a semiconductor facility in Taiwan in order to meet future demand for auto chips.

In May of this year, Foxconn and Stellantis Group, which features carmakers such as Jeep, Citroen, among others, expressed their willingness to form a joint venture to distribute in-car and connected-car technologies.

These developments coincide with the Indian government’s efforts to encourage automakers to manufacture electric vehicles in India rather than importing them. Car import taxes of up to 100 percent make it unprofitable for manufacturers to import and sell vehicles from other countries: they eventually cost too much in comparison to vehicles manufactured in the United States. Elon Musk famously spoke up regarding this matter earlier.

Because of the low labor costs in the country and the low import tariffs, investing in domestic manufacturing capabilities is a smart decision for any manufacturer looking to sell vehicles in the domestic market. These market conditions offer local manufacturers an obvious and clear edge when it comes to approaching the EV market, which has contributed to an increase in EV investments in India, among other factors.