FTX owes $3.1 billion to 50 creditors The exchange owes about $1.45 billion to its top ten creditors, it said in a court filing on Saturday. However, it did not name any of them.

FTX company, which filed for bankruptcy in the US, said that it owes a total of $3.1 billion to its 50 biggest creditors.

In a court filing on Saturday, it mentioned that the exchange owed about $1.45 billion to its top ten creditors. However, it did not name any of them.

On November 11, FTX and its companions filed for bankruptcy in Delaware in one of the highest-profile crypto blowups, giving up an estimated 1 million customers and other investors facing absolute losses in the billions of dollars.

The crypto exchange said on Saturday that it has launched a strategic review of its global assets and is preparing for the sale or reorganization of some businesses.

Meanwhile, another statement by Bloomberg said that FTX Europe unsuccessfully looked for a trading license in Switzerland.

Based in Pfäffikon near Zurich, FTX Europe had applied to Swiss banking regulator Finma for a license for a so-called “organized trading system” that was refused lately.

Buffet from long ago has been doubtful of cryptocurrency. In 2018, he named bitcoin as ‘rat poison squared’. The company said it learned about the website which describes itself as a Texas-based broker founded in 2020 to give investors “an opportunity to achieve a completely passive income from investment in cryptocurrency mining.”

The website is using the domain name berkshirehathawaytx.com. On Friday, as quoted by Reuters, the company said in a statement that “The entity who has this web address has no affiliation with Berkshire Hathaway Inc or its Chairman and CEO, Warren E. Buffet.” 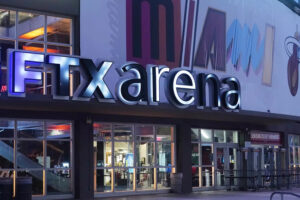 The logo of FTX is seen at the entrance of the FTX Arena in Miami, Florida, U.S.

FTX is a Bahamas Based Company that was recently bankrupt. It was founded by Sam Bankman-Fried and Gary Wong on May 2019. Sam was the former CEO till November. The current CEO is John Ray III who previously handled and lead the bankrupt energy company Enron Corporation. FTX filed for bankruptcy on November 11 after the wave of the customer withdrawal request in the earlier month. The former CEO admitted that the company didn’t have enough assets to meet the demand of customers. The company is suspected to be hacked after the bankruptcy and stealing large amounts of money and investing in Ethereum.