How to play Beat Shazam at home

Beat Shazam debuted on Fox on May 25, 2017 and is a musical game show in the United States. Jamie Foxx hosts the show, and he also serves as an executive producer alongside Jeff Apploff who co-created it with Wes Kauble, Mark Burnett, Rich Riley, Lauren Zalaznick, and Barry Poznick. The series was renewed for a second season by Fox on July 12, 2017, and it debuted on May 29, 2018. 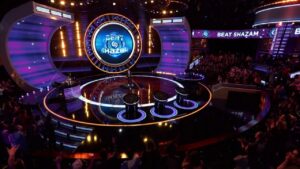 Three teams of two players compete in four rounds to identify a sequence of songs, with each right response earning money. Following the fourth round, the team with the best score goes head-to-head with the Shazam app, aiming to enhance their prizes by naming up to six songs before the programme can identify them. Every team that beats Shazam on all six songs wins a $1,000,000 jackpot.

Beat Shazam’s only source for song titles is the Billboard Hot 100 music chart.

For money, we get to play along with Beat Shazam at home. While we can’t compete for the actual $1 million jackpot, it’s still entertaining to watch and pretend to be a participant on a game show from the comfort of our own homes.

Jamie doesn’t often clarify how we can play Beat Shazam at home, which is a concern. As a result, we’ve detailed exactly how to participate in the television show. But now that we can play it ourselves, many of us are curious if anybody has ever beaten Shazam, which is actually rather tough to achieve on a continuous basis.

Fortunately for us, each season, Jamie Foxx creates videos for us with instructions on how to play at home. To begin, we’ll need a smartphone to download the Shazam app. Then, as long as we watch FOX live on Thursdays at 8 p.m. EST, we may play along with all the participants.

All we have to do now is open the Shazam app whilst watching the show. As long as we keep our phone close enough to the TV to hear Beat Shazam, the software will automatically start listening to it. Then a screen with the command “Play Game” appears, which we click and Shazam.

While we aren’t competing for the entire jackpot, one lucky winner from home is chosen every week to earn $10,000. That’s not bad at all! After we finish playing and watching Beat Shazam, we will be asked to enter our email address for a chance to win $10,000. So it’s well worth your time to check out Beat Shazam – it may be the simplest $10,000 anyone can ever make.

It’s not simple to defeat Shazam in general, but it’s extremely difficult on Beat Shazam. The participants must recall a complete repertoire of songs off the top of their heads under all the lights and pressure. Not only that, but they have to get the song title absolutely perfect – no minor errors allowed.