How to stream Hulu on Discord

Discord is a community-building platform that combines streaming, messaging, and digital distribution. Users connect in private conversations or as part of “servers” via voice calls, video calls, text messaging, media, and files. Aside from gaming, you may also stream your device’s content. You may share your full screen, a single window, or an app with Discord.

During the pandemic, Discord downloads has experienced a significant increase. The app’s downloads just doubled from 219,585 in February 2020 to 120 million in November 2020, with 800,000 downloads each day, and the trend continues. 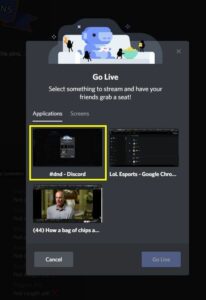 The Go Live feature from Discord is designed to allow users to stream gaming to one another within servers. It can, however, be used to broadcast or stream, effectively letting you to hold movie nights on your servers. You may host a multi-film broadcast for a big group of friends while also listening to them on voice chat, thanks to Discord recently increasing the number of Go Live viewers from 10 to 50. It’s one of the most accurate ways  to replicate having  a movie night virtually.

Discord has a built-in screen sharing feature that allows you to broadcast your Hulu stream to other people . That means you just need one Hulu account to start sharing. You can share your screen with dozens of individuals in your speech channel with the Go Live function.

Follow these steps to get started watching Hulu with friends on Discord :-

Simply ensure that the Hulu window is open and that you’re streaming the show you’d want to watch. You may use the Discord software to talk while you are streaming as well.