Elon Musk, a crypto enthusiast and billionaire, is known for occasionally provoking instability in the cryptocurrency market with his tweets. The CEO of Tesla and SpaceX, Elon Musk, has sent out a fresh tweet on January 25 that is likely to upset the market once more, as he has offered McDonald’s an offer that the latter will not be able to reject.

Elon Musk has pledged to eat a McDonald’s happy meal live on television if the firm embraces Dogecoin as a payment mechanism. “I will eat a happy meal on tv if @McDonalds accepts Dogecoin”, the billionaire wrote on Twitter.

A McDonald’s happy meal for kids comprises burgers, fries, and cold beverages, as well as a toy. Needless to say, Musk’s offer has piqued the interest of many internet users, including McDonald’s employees. “Order confirmed,” a Twitter user claiming to be a McDonald’s employee replied to Musk’s message, adding that “McDonald x crypto should happen.”

This could be what drove Musk to make the offer 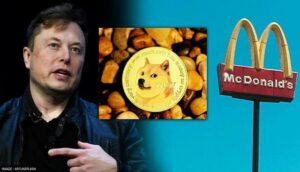 Musk’s offer could be in response to McDonald’s previous tweet, which chastised those who “run crypto Twitter accounts.” McDonald’s tweet stated, “How are you doing guys that run crypto Twitter accounts?” Many fans demanded that the firm accept cryptocurrency Dogecoin for transactions on Shiba Inu in response to the company’s tweet, which has now received over one lakh likes.

Interestingly, Shibetoshi Nakamoto, the founder of Dogecoin, responded to McDonald’s query. Nakamoto tweeted, “hello, wagmi for the last few hours.” It’s worth noting that Dogecoin, which started off as a joke, has grown to become one of the most popular cryptocurrencies, as well as Musk’s personal favorite. It’s unclear how much of a boost Dogecoin will get as a result of Musk’s latest move.

how are you doing people who run crypto twitter accounts

Musk has publicly promoted Dogecoin and implicitly encouraged people to invest in it on a number of occasions. Tesla’s CEO had previously stated in mid-December that his electric car company will manufacture products and use Dogecoin for transactions.

In a tweet, Tesla CEO Elon Musk said, “Tesla will make some stuff buyable with Doge and see how it goes.” The cryptocurrency gained 24 percent in value as a result of the tweet, reaching a little over USD 0.20.