”It would have been a multi-billion-dollar error if I had picked Gold”, says Michael Saylor

MicroStrategy CEO Michael Saylor had told CNBC that a variety of cryptocurrencies, not only bitcoin, have a bright future. Saylor, one of the most outspoken proponents of bitcoin, has enhanced the prominence of his enterprise software company in the last year by significantly investing in the world’s largest cryptocurrency by market capitalization.

In a tweet posted on Sunday, Michael J. Saylor said: ”It would have been a multi-billion-dollar error if I had picked #Gold instead of #Bitcoin last year. If you don’t pick the appropriate solution, you won’t be able to diagnose the problem.”

Who is Michael J. Saylor?

American business executive Michael J. Saylor is the founder of MicroStrategy, which offers cloud-based business analytics, mobile software, and mobile marketing services. Saylor revealed his desire to purchase Bitcoin, gold, or other alternative assets instead of storing cash on MicroStrategy’s quarterly earnings conference call in July 2020. MicroStrategy bought 21,454 Bitcoin with $250 million from its cash reserve the next month. 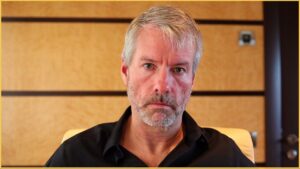 Bitcoin began 2021 with a new all-time high above $34,000 (£24,850, €27,724), and analysts are optimistic about the cryptocurrency’s continued good performance in the coming year and beyond. The value of Bitcoin rose threefold in 2020, demonstrating a consistent rise despite the stock market’s severe impact from Covid-19. With the US dollar declining, Bitcoin and other famous cryptocurrencies are gaining popularity as traditional investors seek to diversify their portfolios and improve their returns.

Michael J. Saylor said in an interview on “Fast Money” that different cryptocurrencies serve different objectives, but that newbies to the digital asset world may take some time to grasp those distinctions. According to Saylor, bitcoin is “digital property” and a store of value, whereas ether and the Ethereum blockchain are attempting to disrupt traditional finance.