Artificial Intelligence (AI) makes it possible for the machines to learn from past experiences and stimuli. It has made the robots and machines now capable to participate in various fields. This contribution has been regarded that of great importance for the humanity. As the technology advances, the researchers develop newer and better forms to AI which can be easier and efficient to use.

A team of researcher based in Japan has been able to develop a robot powered with AI capable of performing fine arts. Eight members from IBM Japan, University of Tokyo and Yamaha Motors were able to develop this robot which is now able to paint. The team members share a background in machine learning, robotics and art.

This was done under the AI Painting Project which in turn was done to extend creativity for machines in the digital era. This particular project makes it possible for the robot to create various pieces of art while utilizing the colors, canvas and a paintbrush.

The team is also planning on updating further developments which will allow the robot to see its painting in progress. This will be done by using a visual feedback system. Upon further development human intervention and co creating is expected. The team is hopeful that the final product of painting which is created by the Artificial Intelligence (AI) has the capability of introducing the world to a completely different category of art and aesthetics which are completely created by the machines. 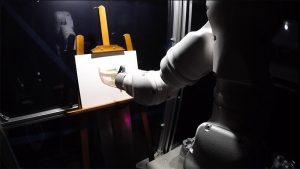 This robot can be programmed to create a piece of art based on the number of brushstrokes. The robot can also be instructed to develop a particular final image. This helps in determining the complexity of the painting.

As the robot can be programmed on using a particular number of brushstrokes, the user can instruct it to create a particular art form. For instance, if this robot is instructed to use only 30 strokes it will create an abstract sort of a painting. Whereas instructing it to use around 300 brushstrokes will create a more realistic looking piece.

This robot is capable of painting just like any human artist. The robot arm is equipped to hold the paint brush like a human painter. The AI technology which has been employed for this robot is based on the set of values which it uses while creating art. Thus one can say that the art pieces are not just some random brush strokes.

The images created by the robot are based on the evaluation criterion of ‘most like the presented concept’. The images are not randomly generated. It is capable of using art with the help of paintbrush and colors which has been provided to it. This robot is capable of working with both acrylic paint and water colors. It also mixes the colors with water.

This robot will be presented virtually at the SXSW 2021. It will be a part of the ‘Todai to Texas’ showcase. This robot and this concept is a blend of AI, Internet of Things (IoT), art and robotics. The researchers aim, at developing an independent creative entity to augment human creativity.