In Japan, the authorities have asked Cryptocurrency exchanges not to conduct crypto assets transactions. A new set of crypto sanctions against Russia was recently implemented by the G7. Japan will impose penalties on crypto exchanges that do not comply with sanction rules. 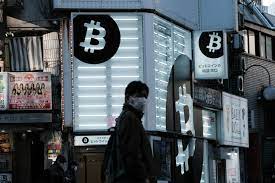 On Monday, Japanese authorities ordered cryptocurrency exchanges not to conduct transactions that involve crypto assets that are subject to asset-freeze penalties imposed on Russia and Belarus as a result of the Ukraine conflict.

Cryptocurrencies are being exploited by Russian firms as a backdoor for financial sanctions imposed on the country for invading Ukraine.

On Friday, the US Treasury Department published new instructions requiring bitcoin firms operating in the United States to refrain from transacting with sanctioned countries.

“We decided to make an announcement to keep the G7 momentum alive,” said a senior official at Japan’s Financial Services Agency. “The sooner the better.”

A statement from the Group of Seven (G7) on Friday said “illicit Russian actors utilizing digital assets to enhance and transfer their wealth would face repercussions.”

Crypto exchanges that do not comply with Russian sanctions may face three years in prison or a fine of one million yen ($8,487.52), according to Japan’s Financial Services Agency and Ministry of Finance.

Forkast news reported that the FSA has ordered crypto exchanges to report any illicit crypto transactions found from sanctioned customers to the authorities.

One way is Russians’ usage of ransomware, which is well-established in the country. Almost 74 percent of the world’s total ransomware – worth over $400 million in cryptocurrencies – was attributed to Russian sources in 2021.

Regulators are attempting to reduce the number of crypto exchanges that were involved in allowing Russia-based criminals to launder enormous sums of money by cracking down on them.

Cryptos can also be used by Russia for bitcoin mining. Russia has a competitive edge in crypto mining, according to Russian President Vladimir Putin, due to a surplus of electricity and trained miners.

There are already 30 registered crypto exchanges in Japan, according to an industry body. Japan’s request for all 30 exchanges comes in response to Japan’s most recent sanctions list, which includes 44 Russians, including Russian President Vladimir Putin, as well as ten organizations.

Given the new market’s prominence, global regulators are concerned about its safety for investors. The US Securities and Exchange Commission has rejected multiple applications for spot bitcoin exchange-traded funds, citing the risk of market manipulation as one of the main reasons.

Also read: Everything You Need to Know About ThorChain