Following his departure from Barcelona, footballer Lionel Messi is said to have received a fraction of Paris Saint-Germain (PSG) fan tokens ($PSG) as part of his signing bonus. 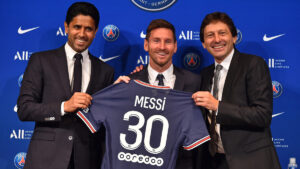 This Monday, the 34-year-old Argentine agreed to a two-year deal with Paris Saint-Germain (PSG), with an option to extend for a third year. His departure came as a result of the Spanish La Liga’s financial fair play laws, which made it financially untenable for Barcelona to keep the great player.

Paris Saint-Germain, often regarded as the wealthiest club in the world, chose to take advantage of this by presenting a two-year contract to the six-time Ballon d’Or winner.

Messi agreed to get a portion of the “welcome package” (the signing on fee) in the team’s cryptocurrency fan token – $PSG, according to Reuters. Socios.com, the token provider, made the payment.

The team wouldn’t say how much Messi received in the $PSG currency but said it was a “significant sum.” Messi is expected to earn $41 million per year (plus bonuses) at PSG, as well as a $30 million signing bonus.

Chili, the blockchain startup that runs the sports token platform Socios, where $PSG fan tokens are generated, has revealed that $PSG trade volumes topped $1.2 billion in the days leading up to the player’s departure.

PSG has been dealing with cryptocurrency through its collaboration with Socios since 2018, while FC Barcelona joined as a partner among other international, high-profile clubs such as Atlético de Madrid, Juventus, and Manchester City.

People would be “shocked, honestly, at the statistics we have,” PSG president Nasser Al-Khelaifi said if the exact details for the sale were made public.

The club noted that “the euphoria around the club’s latest signings in the busy summer transfer window caused a massive increase of interest in $PSG Fan Tokens, with trading volumes reaching $1.2 billion in the days leading up to the relocation.”

During the pandemic-induced lockdowns last year, flash sales of fan tokens were exceptionally successful for teams. Clubs were able to engage with supporters and increase their revenue and earnings in this way.

“Embracing Socios.com and $PSG Fan Tokens has been a great success for the Club,” said Marc Armstrong, Paris Saint-chief Germain’s partnerships officer. He stated, “We were able to engage with a new worldwide audience, resulting in a major digital revenue stream.”

If You find this Informative do share this with your friends and family!